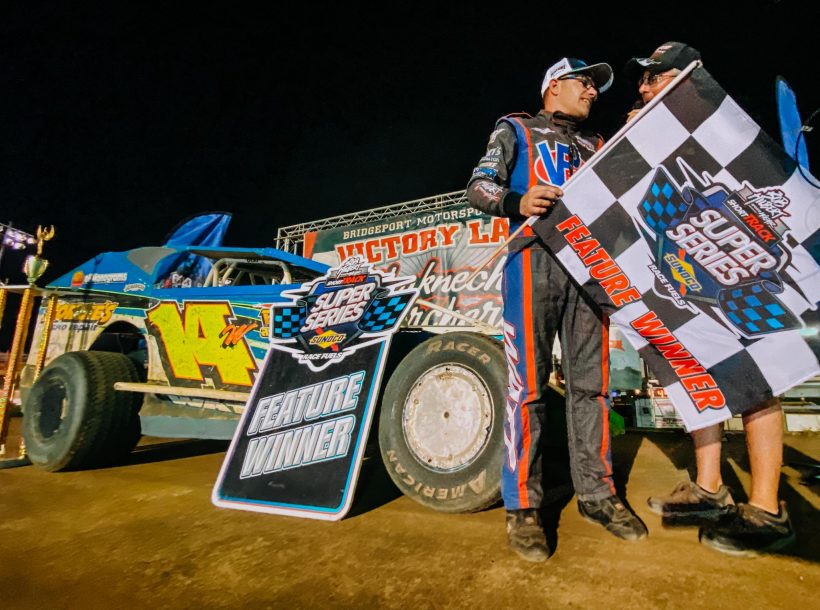 After a 50-lap, caution-free main event it was Boyertown, Pa.’s Ryan Watt capturing the ‘South Jersey Shootout’ at Bridgeport Motorsports Park Tuesday night. The feature event went off nonstop in just over 14 minutes.

“We’ve been close at this new track a lot, I think we had six seconds before tonight,” claimed an elated Watt in Victory Lane. “The car was fast in hot laps and we never really changed anything all night and it worked out.”

Watt fired from the outside pole, next to fellow Keystone State driver Rick Laubach following the Beyea Custom Headers Redraw.

The two PA drivers paced the field for much of the early going, while Matt Sheppard trailed patiently in the third position.

The driver on the move was Sprakers, N.Y.’s Stewart Friesen, who drew 12th in the redraw, but quickly made his way into the top five on lap five. By lap 10, Friesen had worked by Mike Mahaney to take the fourth position.

Friesen’s charge appeared to have more in the tank, as he quickly reeled in and began challenging Matt Sheppard for the third position on the 15th trip around the speedway.

While Friesen continued to pressure Sheppard, Watt – who had quietly been working in second – was suddenly closing on Laubach’s back decklid as the leaders carved through traffic on the 20th circuit.

Friesen and Sheppard began another classic battle for the third position, trading slide jobs and crossovers as they navigated the high banks at Bridgeport.

While the two titans waged war for third, even trading rub rails at one point, Covington Township, Pa.’s Alex Yankowski had suddenly entered the fray, making it a three-car race for the third position.

While the race for third was intensifying, Watt had found his rhythm on the topside of the high banks, racing around Laubach in lap traffic on lap 26, one lap after Laubach claimed the Danny’s Pizza Pizzazz $100 halfway leader bonus.

While Watt raced to the front, suddenly Sheppard shook off Friesen’s bid for third, and began to catch the lead pair. Laubach’s handling was beginning to fade, as Sheppard quickly caught and slid by for second on the lap 32.

Sheppard would use the remaining 18 circuits to zero in the back bumper of Watt’s No. 14w as the duo continuously navigated lapped traffic.

Friesen and Yankowski swept around Laubach as well but appeared to be a step behind the top two in the late stages.

As the laps dwindled, so did Watt’s lead. With lap traffic becoming heavier and heavier with each passing lap, Sheppard closed within striking distance with five laps to go.

In the end, the man they call ‘Super’ Matt couldn’t muster up the momentum to overtake Watt.

“I thought I had a good chance at him with two to go, but I picked up a real bad push, and I couldn’t get back to him on the last lap,” explained Sheppard following his runner-up finish.

Sheppard grabbed another STSS runner-up in his Hurlock Auto & Speed No. 9s and Friesen held on for a podium run in the Halmar International No. 44. Friesen was the race’s Ad-Art Sign Company Hard Charger ($250) after picking the worst available number – 12 – in the redraw.

Yankowski impressed a star-studded field again in his family-owned No. 84y and Laubach held on for fifth in the Ryan Kerr-owned No. 1K.

South Region point leader Mike Mahaney landed sixth in the George Huttig-owned No. 35 with Middletown, N.Y.’s Anthony Perrego following him to seventh in the Brian Smith-owned No. 44.

Ringoes, N.J.’s Ryan Godown was the first New Jersey driver across the line in eighth and received a $150 cash bonus from Rock Fantasy Concert Shop and Mooresville, N.C.’s Max McLaughlin placed ninth in Norm Hansell’s No. 357. Sayreville, N.J.’s Dominick Buffalino rounded out the top-10 in the Glenn Hyneman-owned Keystone Racing No. 126.

A special 3-lap Dash presented by Slideways Productions added a 25th fully paid starter to the feature. Joseph Watson used the Dash to punch his ticket into the main event with the win.

Forty Crate 602 Sportsman were on hand for Round No. 5 of the Belmont’s Garage South Region and Ringoes, N.J.’s Ryan Godown Jr. went wire-to-wire in the 25-lap non-stop race.

Godown Jr. claimed the $1,500 payday in the biggest win of his career. Middletown, N.Y.’s Brian Krummel raced to second and Whitehouse Station, N.J.’s Sammy Martz Jr. rounded out the podium.