What A Finish: Sheppard Fends Off Bachetti in Woodhull Raceway ‘Hustlin’ the High Banks’ Thriller 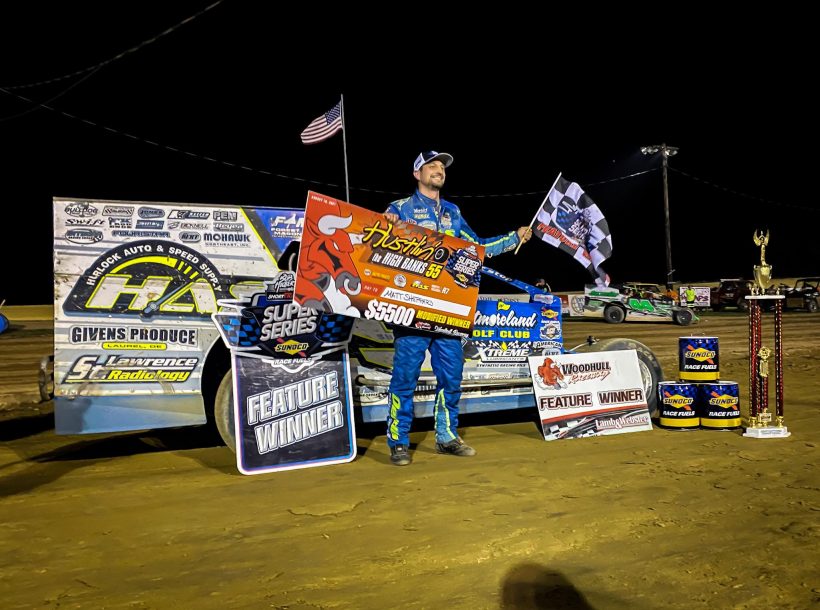 The 55-lap ‘Hustlin’ the High Banks’ headliner at Woodhull Raceway was decided by less than a car-length, as Savannah, N.Y.’s Matt Sheppard raced across the line for his third Bob Hilbert Sportswear Short Track Super Series (STSS) Fueled By Sunoco Modified win of the 2021 season.

“I thought we were done once Andy (Bachetti) got by us; he was just so good… I got a really good restart (lap 12) and drove the heck out of it and cleared him,” explained Sheppard to a capacity crowd of what turned out to be his race-winning move.

The unique Woodhull oval’s hillside grandstands were packed with what was believed to be the largest crowd to date for a series race at the Steuben County facility now owned by Terry and Nikki Brewer.

Woodhull, dubbed ‘New York’s Toughest Bullring’ proved to be just that in the early going. Several early yellows continued bringing the field together, including a big one on lap four.

Westfield, Pa.’s Billy Van Pelt collided with East Greenbush, N.Y.’s David Schilling, sending him around and collecting a host of other cars. Van Pelt, the defending event winner, was sent to the rear for the contact.

When the field went back to racing following the lap-four yellow, Johnson was now joined by Sheppard on the front row, and Sheffield, Mass., star Andy Bachetti was joining the party in the early going.

On lap seven, Bachetti slipped by Danny Johnson at the line before another yellow came out, giving Bachetti control of the restart.

On the restart, Sheppard drove by Johnson, and brought Middletown, N.Y.’s Anthony Perrego with him to third.

Following another yellow on lap 12, Sheppard got the restart he was looking for to take the lead back. Bachetti crept around the bottom while Sheppard continued to work the outside continuously, finally driving around Bachetti on lap 15.

A lap-24 caution reset the field, giving two hard chargers, Van Pelt coming back forward, and Unadilla, N.Y.’s Billy Decker a chance to continue to race their way through the top-10.

The recovering Van Pelt was the man to take advantage, as the 22-time Woodhull champion found another gear on the outside lane, quickly flying into the top five around Danny Johnson and Stewart Friesen.

Van Pelt raced around Perrego on lap 34 and appeared to be the fastest car on the track. On a lap 35 restart, Van Pelt grabbed another position, sliding by Bachetti before drifting off the banking in turns three and four, falling back to fourth.

While Bachetti, Perrego, and Van Pelt waged war for the runner-up spot, Sheppard began to coast out front, leaving the field behind.

A few short laps later, Sheppard caught the tail end of the field, and was unable to make ground traffic, allowing the three tailing him to close in.

At the white flag lap, Perrego and Bachetti had pulled within just two car lengths of Sheppard’s Hurlock Auto & Speed No. 9s. Perrego followed Sheppard to the bottom, while Bachetti wasn’t giving up on the outside.

The slower cars in front of Sheppard got sideways in three and four on the last lap, forcing Sheppard to break his momentum. Bachetti’s charge off the outside came up one car length short in the Garrity Asphalt Reclamation No. 4, as Sheppard held on for the win.

Perrego settled for third in Brian Smith’s owned no. 44 and Van Pelt’s charge stalled in fourth in his Twin Rivers Timber No. 2 machine. Ryan Susice rounded out the top-five in the Hoopes Trucking No. 10.

Billy Decker was the $250 FloRacing Hard Charger, going from 25th to sixth in his Jeremy Smith-owned No. 91. Danny Johnson grabbed seventh in the Tyler Siri-owned No. 27J and Dundee, N.Y.’s Brady Fultz claimed eighth in the Herb Wright No. 88. Jacob Dgien drove from 18th to finish ninth and Beaver Dams, N.Y.’s Dillon Groover rounded out the top-10.

Heat winners, receiving $50 each from FloRacing were Fultz, Alan Johnson, Joe Dgien and Perrego. The consolation victor was Mike Bills.

Veteran Dale Welty of Montour Falls, N.Y., claimed his third career STSS Crate 602 Sportsman win in Round No. 5 of the Precision Hydraulic & Oil North Region. Welty started third and worked his way to the front in a stop and start 25-lap main event. He earned $1,500.

The win was Welty’s first since 2018 on the STSS tour, and a crowd pleaser, as the hometown racer defended ‘New York’s Toughest Bullring’ against the 36-car field.