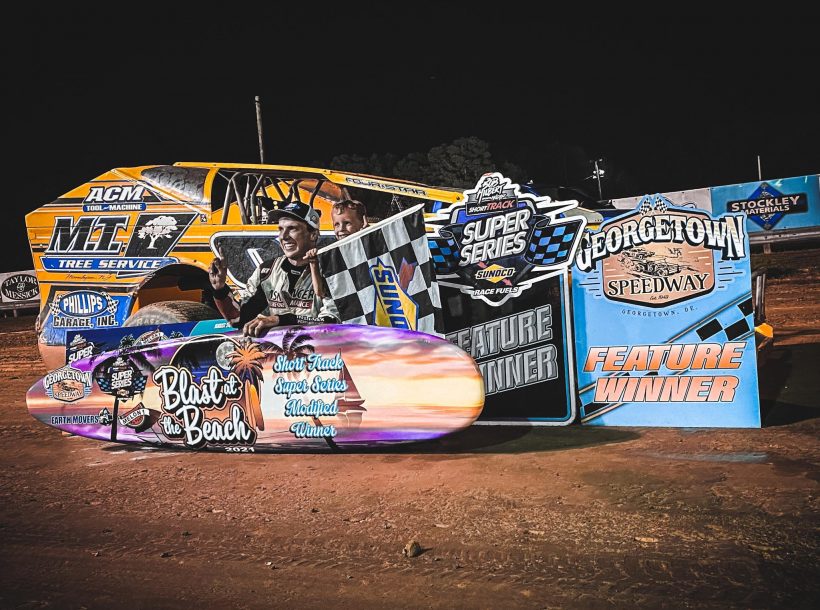 GEORGETOWN, DE – You can call it the Kid’s kid’s playpen.

Billy Pauch Jr. continued his excellence at Georgetown Speedway, claiming his second ‘Blast at the Beach’ presented by Melon 1 and Earth Movers LLC in the last three years.

Pauch Jr.’s triumph was his first of the 2021 season and the fifth of his Bob Hilbert Sportswear Short Track Super Series (STSS) Fueled By Sunoco career.

The Frenchtown, N.J. native claimed Round No. 7 of the Velocita-USA South Region presented by Design for Vision and Sunglass Central and with it, a cool $6,300 for his Tuesday night efforts.

The ‘Kid’s Kid’ drew the worst number in the Beyea Custom Headers Redraw, firing off from the 12th position, while Laurel, Del.’s James Hill and Sprakers, N.Y.’s Stewart Friesen fired off from the front row.

One of the pre-race favorites went by the wayside on the second circuit, as Savannah, N.Y.’s Matt Sheppard went up and over several times in the third turn. Fortunately, Sheppard walked away from the carnage unharmed.

On the ensuing restart, Wallkill, N.Y.’s Tyler Dippel would take the lead away, after getting by Friesen on the previous restart.

Dippel used the outside lane to jump to the lead, while Friesen worked underneath Hill to take the runner-up spot and stalk Dippel at the front of the field.

Further back, Pauch Jr.’s ascent started to become noticeable, as he had risen to the fifth spot from 12th in the opening five laps.

Dippel and Friesen pulled away up front, while Pauch Jr. reeled in Milford, Del.’s Jordan Watson and Hill, making it a three-car duel for the third spot, with Hill holding off the other two.

A lap 10 yellow reset the field, and Watson and Pauch Jr. both got by Hill.

Another yellow one lap later gave Billy Jr. prime starting position, on the outside of the second row, and right behind leader Dippel, who’d be choosing the top on restarts. The Kid’s Kid took advantage, driving around Watson and immediately challenging Friesen for the runner-up spot.

After a two-lap battle, Pauch Jr.’s assault on the field continued, using the bottom groove to slide by Friesen and set his sight eyes on leader Dippel.

Fourth-place runner Jordan Watson broke on lap 17, bringing out another yellow in the first half of the race, and restacking the field just shy of halfway.

The restarts continued to be golden for Pauch Jr. as Dippel’s car got tight in turn one, allowing Pauch Jr. to drive underneath and set sail for good. Pauch Jr. would lead lap 18, collecting the $200 Danny’s Pizza Pizzazz Halfway award and every lap after that to claim the win.

Tyler Dippel grabbed his best STSS finish of the season with a runner-up in his Teo-Pro Car No. 1 and Friesen rounded out the podium in his Halmar International no. 44.

The third-place finish was good enough to give Friesen the Stockley Tavern “Delaware Double” $1,000 bonus for the best average finish between the ‘Diamond State 50’ at Delaware International Speedway in Delmar, Del., and the ‘Blast at the Beach.’

Ringoes, N.J.’s Ryan Godown grabbed the fourth spot in his first STSS run with the Dan Sommeling-owned No. 51 and Middletown, N.Y.’s Anthony Perrego had a great points night in the Brian Smith owned No. 44, claiming the fifth spot.

Milford, Del.’s Joseph Watson was the highest finishing Delaware driver, grabbing sixth in his Mills Racing No. 30 and with it $500 courtesy of Holly Hill Farms. Sewell, N.J.’s Richie Pratt Jr. had a strong night, crossing the line seventh in his family-owned No. 28. Hellertown, Pa.’s Rick Laubach was the $200 Candy’s Homemade Ice Cream Hard Charger, coming from 22nd to eighth in the Ryan Kerr-owned No. 1k. Boyertown, Pa.’s Mike Gular grabbed the ninth spot in the Terry Fasnacht-owned No. 2A and fellow Boyertown native Ryan Watt rounded out the top-10in the Ron Roberts Racing No. 14w.

Newtown, Pa.’s Joe Toth finally got his elusive first victory with the STSS in the Crate 602 Sportsman division. After chasing series checkered flags with several podium runs, Toth claimed his first career STSS win at the home of his 2020 track championship at Georgetown Speedway.

Toth outdueled Johnstown, N.Y.’s Brian Calabrese on a lap-21 restart to take the lead and drive away with the win.

Calabrese would take the runner-up spot while Petersburg, N.J.’s Tom Sherby rounded out the podium finishers.

Jackson, N.J.’s Steve Davis finished fourth in his Masker Racing No. 72 and Chalfont, Pa.’s Greg Humlhanz rounded out the top-five.

Did Not Start: Joe Waters