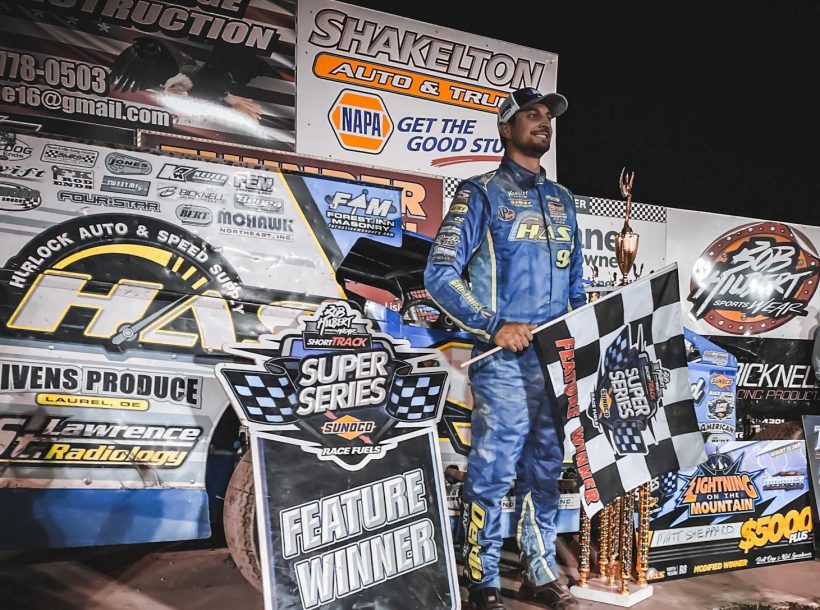 Savannah, N.Y.’s Matt Sheppard led all 50 laps of the ‘Lightning on the Mountain’ for his fourth Bob Hilbert Sportswear Short Track Super Series (STSS) Fueled By Sunoco victory of 2021.

“Our car was so good all night long, we never touched a thing on it. I just didn’t know if I should run high or low, but our car was so good it didn’t matter,” explained Sheppard of his racecar in Victory Lane.

After winning his heat race, Sheppard drew the pole in the Beyea Custom Headers Redraw, putting him in prime position to rebound from the crash he suffered just a week ago at Georgetown (Del.) Speedway for the ‘Blast at the Beach.’

Sheppard would start alongside his closest competitor on the Hurlock Auto & Speed North Region, as Middletown, N.Y.’s Anthony Perrego pulled the No. 2.

Right from the drop of series starter Joe Kriss’ green flag, Sheppard quickly flexed his muscle, showing he had the car to beat.

While Sheppard marched to the beat of his own drum out front of the field, Oxford, N.Y.’s Rusty Smith slid by Perrego for second, and King Ferry, N.Y.’s Mike Mahaney was in the picture for a podium spot, challenging Perrego before a lap-12 yellow.

Norwich, N.Y.’s Alan Barker was also a driver on the move in the early going, coming from his 17th starting spot, to climb to eighth when the 12th-lap caution flew.

A short green-flag run followed, and Barker continued his assault, moving into the fifth spot before a lap-17 yellow fell.

The yellow’s continued to help Sheppard, always falling before the leader truly had to dice in lap traffic to give the runner-up cars an opportunity to reel in the No. 9s car.

At the halfway point, Sheppard picked up the $200 Superior Remodeling Halfway Bonus while Mahaney chased after him, and the ‘Wild Child’ Andy Bachetti had climbed to fourth using the outside line.

A long stretch of racing under green forced Sheppard to work in lap traffic, doing so effortlessly, continuing to stretch his margin over what was becoming a four-car battle for second.

With 15-laps remaining, Mahaney had Smith, Bachetti, and Barker all on his tail for the runner-up spot.

Barker was the one to seize the opportunity, driving by all three of his competitors and stealing the runner-up position with 10 laps remaining.

On the final restart of the night, Smith would work underneath Mahaney to take the final podium spot.

Despite all the challengers and numerous restarts, Sheppard never made a mistake, driving his Hurlock Auto & Speed Supply No. 9s to the ‘Lightning on the Mountain’ victory.

Barker was the $300 TAMCO LLC Hard Charger, coming from 17th to second in his Klinger Motorsports No. 77 and Smith rounded out the podium.

Sheffield, Mass.’s Andy Bachetti finished his back-and-forth night in the fourth spot in his Garrity Asphalt Reclamation No. 4 and Mahaney was fifth in the George Huttig-owned No. 35.

Perrego also slid back on the last restart to sixth in the Brian Smith-owned No. 44 with Otego, N.Y.’s J.R. Hurlburt coming from 19th to finish seventh in the Jamie and Denise Page Algonkin Motel No. 6H. Binghamton, N.Y.’s Darren Smith came home eighth in the Jeremy Smith Racing No. 12.

East Greenbush, N.Y.’s Bobby Hackel continued his solid rookie year with the STSS, claiming ninth in his family-owned No. 97 and Port Jervis, N.Y.’s Billy Van Inwegen rounded out the top-10 in the Chad Loiodice-owned No. 5L.

Thirty-seven STSS Modifieds signed in to compete at the ‘Lightning on the Mountain’ event.

The STSS Crate 602 Sportsman ran Round No. 6 of the Precision Hydraulic & Oil North Region and Savona, N.Y.’s Kreg Crooker picked up his first career STSS victory.

Crooker became the 44th different winner in STSS Sportsman history. Crooker came from the seventh starting spot to pass for the lead just shy of the halfway point and led the remaining of the 25-lap feature to take the $1,500 paycheck.

Montour Falls, N.Y.’s Dale Welty followed up his STSS win at N.Y.’s Woodhull Raceway with a fourth-place run on Tuesday night and Accord, N.Y.’s Hunter Lapp rounded out the top five.

Racing returns for the STSS on Thursday, September 16 at Fonda Speedway for the ‘Fonda 200’ weekend featuring the ninth event of the Hurlock Auto & Speed Supply North Region for the Modifieds. The three-day weekend of racing all leads to Saturday’s historic Fonda 200 (200 laps, $53,000 to win & $1,000 to start). Round No. 7 for the Precision Hydraulic & Oil Crate 602 Sportsman North Region (25 laps, $2,000 to win) on joins the Modifieds on Saturday.

Did Not Start: Alan Komar