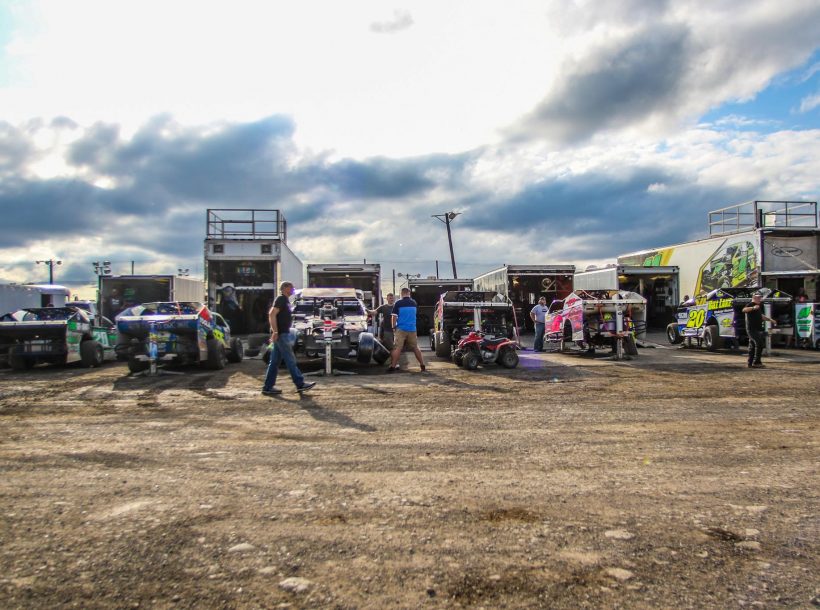 The Bob Hilbert Sportswear Short Track Super Series (STSS) Fueled By Sunoco is set for the biggest day – and biggest payout – in its history.

Savannah, N.Y.’s Matt Sheppard won the first qualifier, presented by Upstate Auto in Germantown, N.Y. After drivers drew for their qualifier starting positions, Sheppard had his work cut out for him, as he would start 13th (last), for the 15-lap event.

Early yellows gave Sheppard an opportunity to continuously pick up positions before the field would be restacked. A lap-three yellow came out and Sheppard had already climbed to the sixth position, while Steve Akers and Chris Curtis occupied the front row.

On the restart, Sheppard showed why they call him ‘Super’ Matt. Sheppard darted around the outside, climbing from sixth to second and locking in on new leader Chris Curtis.

Sheppard raced to the inside of Curtis, sliding by on lap seven and pulling away with the $500 payday courtesy of Upstate Auto. King Ferry, N.Y.’s Mike Mahaney came home with the runner-up position and Hartford, Conn.’s Chris Curtis rounded out the top three, who qualified for the redraw for the Fonda 200.

2021 Fonda Speedway co-champion Rocky Warner picked up the win in the second qualifier and the $500 check from Dave Prime MAC Tools. Warner, like Sheppard, did not have a favorable draw, as Warner started from the 10th position in his qualifying race.

The Johnstown, N.Y. native didn’t race to the front as efficiently, chasing down Jeff Rockefeller and Gloversville, N.Y.’s Josh Hohenforst on lap number 13.

Warner chased the top two down for several laps in the non-stop race, before getting to the leaders just as they entered lap traffic. Warner, now a two-time Modified champion at the ‘Track of Champions,’ showed his ability around the speedway to race by the two leaders for the win.

Hohenforst would race by Rockefeller to get the runner-up spot, and Jeff Rockefeller held on for the final redraw spot. Otego, N.Y.’s J.R. Hurlburt finished in fourth and Johnstown, N.Y.’s Craig Hanson grabbed the fifth position. Mexico, N.Y.’s Addison Bowman, and Brian Pessolano were the final two qualified cars for the ‘Fonda 200.’

Unlike the first two winners, Wallkill, N.Y.’s Tyler Dippel started from the pole position and easily walked away with qualifier No. 3. His $500 pay came courtesy of DKM Fabrication/Cyclone Chassis as the presenting sponsor of the third qualifier.

While Dippel started up front and easily walked away, Covington Township, Pa.’s Alex Yankowski started fifth before working his way to the runner-up position. By the time Yankowski had gotten to second, Dippel had already cleared the field by a straightaway, giving Yankowski no opportunity to run down the leader.

Sprakers, N.Y.’s Stewart Friesen raced from the 10th starting position into third, giving him the final redraw position for the 200-lap main event.

The hometown boy, Danny Varin raced from his fourth starting position and, like Dippel, drove to an even more dominating victory in the final qualifier presented by FloRacing.

Varin would end up winning the race by over 10 seconds over second place finishing Dave Constantino, more than half the track.

Middletown, N.Y.’s Anthony Perrego charged from the back for a fourth-place run and Pittsfield, Mass.’s Brett Haas rounded out the top five. Middlesex, N.Y.’s Alan Johnson and Middletown, N.Y.’s Roger Henion were the final qualified cars.

The STSS Crate 602 Sportsman will also be on hand for a full program in Round No. 7 of the Precision Hydraulic & Oil North Region.

Did Not Start: Will Shields.