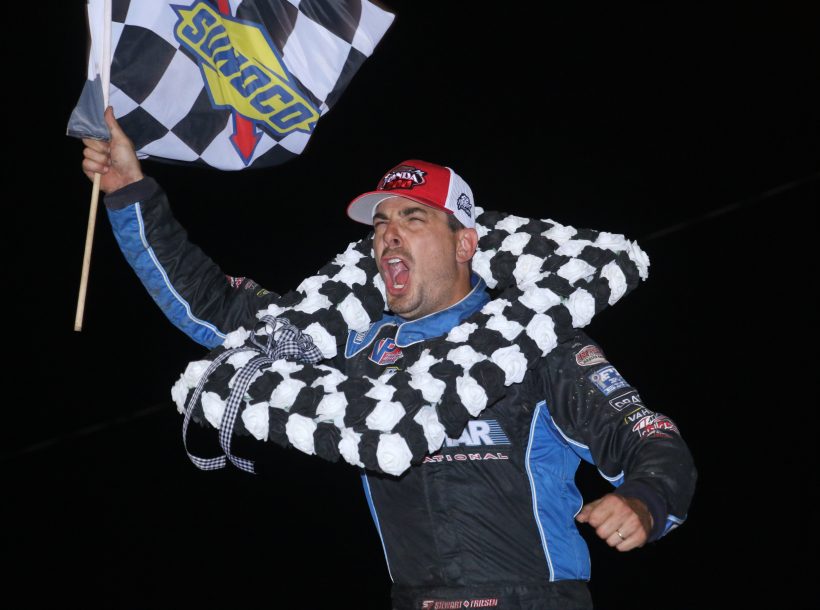 Sprakers, N.Y.’s Stewart Friesen recovered from an early race mishap – thanks in large part to his crew – to claim the Southside Beverage ‘Fonda 200’ at Fonda Speedway.

“I got together with a lapper, cut the tire, broke the shock… hats off to my guys, they did such a great job. Tonight was such a great team effort,” an elated Friesen proclaimed in Victory Lane.

Friesen netted over $53,000 for his win in the highest paying Modified race in the Northeast in 2021. The win was also Friesen’s 31st career Bob Hilbert Short Track Super Series (STSS) Fueled By Sunoco victory, the most in series history.

Friesen raced to the lead after the halfway break, and never relinquished the lead from there, dominating the final 100 laps of the highest paying event in the history of the STSS.

The ‘Fonda 200’ was the penultimate race of the Hurlock Auto & Speed Supply North Region championship chase.

Rockefeller would lead the opening two laps before Varin raced around the Ballston Spa native to take the top spot.

Varin raced to the front, setting a torrid pace while multiple battles took place inside the top-10, including Friesen, who was methodically marching forward.

The first yellow came out just past lap 20 as Covington Township, Pa.’s Alex Yankowski, who was running in the top-10, came to a stop on the front straightaway due to mechanical issues.

By then, Friesen had climbed to the runner-up spot, setting up a battle between Friesen and Varin for the lead.

Multiple instances saw Friesen and Varin race side-by-side for the lead as the top two knifed through lap traffic. While they battled, Johnstown, N.Y.’s

Rocky Warner was catching the leaders, making it a three-car battle for the top spot.

Varin and Friesen continued to set a good pace, while Warner began to fall into the clutches of a hard charging Ronnie Johnson, who had raced from 14th to a fight for third.

Lap 66 saw Varin lose the lead for the first time since he gained the top-spot on lap three, as the Fonda native slid up the racetrack in the third turn, allowing Friesen to drive underneath Varin and take the lead.

The lead however was short lived, as Friesen got stalled behind lap car Brett Haas, giving Varin the opening to drive back underneath Friesen and take the lead. The following lap, attempting to skate by Haas down the front straightaway the two cars made contact, blowing Friesen’s right-rear tire and breaking the right-rear shock.

Friesen quickly made it to the pits, where his crew saved the No. 44’s opportunity to win the race. Friesen returned to the racetrack before the green flag flew, keeping himself on the lead lap.

Under the same yellow, fifth-place-running Mike Mahaney came to the pits as well, putting on fresh rear tires.

The yellow and cars heading to the pits moved Ronnie Johnson and Anthony Perrego into the second row, while Varin and Warner brought the field to green.

Duanesburg native Ronnie Johnson continued his march from 14th when the field went back to racing, quickly driving by Warner for second and setting his sights on Varin.

Another yellow on lap 75 gave more drivers the opportunity to come get fresh tires before the halfway break and allowing Ronnie Johnson to restart alongside Varin. Johnson would keep pace with Varin before sliding by on lap 87 to take the lead.

Johnson would carry the lead all the way to the halfway break, picking up the $200 bonus courtesy of Superior Remodeling.

The drivers who pit shortly before the lap 100 break, elected to head to the infield – including Friesen – while several of the leaders went pitside.

When the field went back to racing, Cropseyville, N.Y.’s Matt DeLorenzo was the leader, and Friesen was alongside.

The story of the second half of the race was much different than the first, as Friesen would jump off the outside on the restart and take the lead for good.

Rocky Warner gave Friesen a challenge, showing his nose to the outside of Friesen at one point, before Friesen kicked it into high gear.

“I saw him at the top of turn two once and realized I had to go. I went as hard as I could after that… I wasn’t conserving tires anymore,” explained Friesen of Warner’s challenge to him.

Friesen’s dominant second half of the race saw him lead all 100 laps, including comfortably pulling away in the final ten lap green flag run, racing to his 11th Fonda Speedway win of the season, and the $53,000 victory in the Halmar International No. 44.

Warner raced to second in the Jake Spraker-owned No. 97 and King Ferry, N.Y. native Mike Mahaney rounded out the top three, making it the same podium finishers as the 2019 ‘Fonda 200.’

Danny Varin grabbed fourth in the Ed Monger-owned No. 93 and Wallkill, N.Y.’s Tyler Dippel rounded out a solid night with a top five in the Teo-Pro Car No. 1.

Johnstown, N.Y.’s Craig Hanson raced to sixth after blowing his primary engine on Thursday night in his Ken Hanson Paving no. 20c. Broadalbin, N.Y.’s Adam McAuliffe was the Andy’s Speed Shop $500 Hard Charger, racing from the 33rd position to finish seventh. Matt DeLorenzo held onto eighth in the BBL Companies No. 3D and Binghamton, N.Y.’s Darren Smith came from 28th to finish ninth in the Jeremy Smith Racing No. 12. East Greenbush, N.Y.’s Bobby Hackel IV rounded out the top-10 in the Sharpe Motorsports No. 97.

Edwards charged to the front from his seventh starting position to get the win. Edwards, the 2021 Fonda Speedway champion, raced by fellow Fonda regular Tucker O’Connor to grab the lead just past the halfway point to pick up the win.

Did Not Start: Mark Mortensen