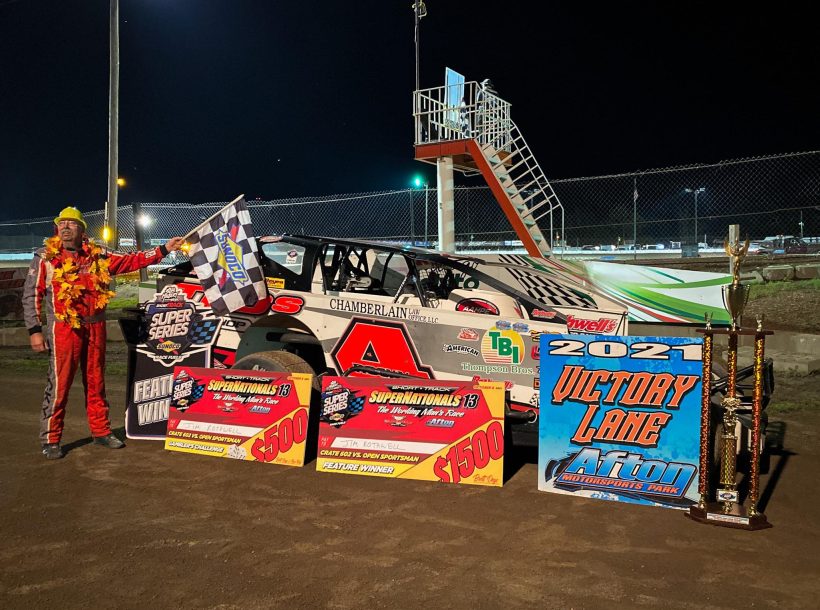 Rothwell claimed the $1,500 payday by winning the 30-lap Crate vs. Open Sportsman feature event. In addition to the $1,500, Rothwell posted the “Gambler’s Fee” pre-race for an additional $500.

‘Rocky’ Rothwell’s night totaled him $3,050 for his efforts, including a $50 bonus from the New York State Stock Car Association (NYSSCA).

Rothwell’s quest for the 30-lap Crate vs. Open Sportsman feature began from the fifth starting position at the drop of the green flag.

Rothwell’s charge to the front wasn’t immediate, as South New Berlin, N.Y.’s Payton Talbot and Montour Falls, N.Y.’s Dale Welty were the hard chargers at the drop of the green.

By lap nine, Welty was challenging Hendrickson for the lead and Talbot was working underneath Gene Beadle to try and pry the third spot away.

Welty’s bid became successful after a lap-11 yellow, as Hendrickson chose the outside groove, leaving Welty the bottom, which he used on his charge from his ninth starting position to the lead.

Talbot had gotten to third and Rothwell was beginning to come to life, as he was alongside Talbot in the second row.

On the ensuing restart, Welty drove by Hendrickson and Talbot followed him into the runner-up spot.

The top-two remained unchanged while Rothwell’s car picked up speed, as he worked into the third spot before a yellow flew on lap 23, resetting the field.

The top three put on a classic battle in the seven remaining laps, as Talbot stayed glued to Welty’s back bumper, while ‘Rocky’ Rothwell was throwing caution to the wind, trying to use the outside groove to sweep around both.

On lap 27, Rothwell’s outside line was becoming effective, as he drove around Talbot and set his sights on leader Welty.

Rothwell’s winning move came as he and Welty came to the white flag side-by-side as Rothwell used his outside momentum to carry him to the win.

Kauneonga Lake, N.Y.’s Justin Holland (14.693 seconds) and New Paltz, N.Y.’s Allison Ricci (14.735 seconds) were the fastest in each timed session on the night. Holland and Ricci are both locked in to the redraw for tonight’s event.

Trombley officially clinched the series championship with the victory.

Trombley and Hutton had company in the late stages from Wind Gap, Pa.’s Kevin Nagy, as the Keystone State invader was making the outside line work.

Nagy pulled up alongside Trombley for the runner-up spot at the time, before just clipping the outside wall which sent him around in front of the field and ending Nagy’s bid for the win.

Trombley pestered Hutton for several laps before the CRSA point leader was able to use the bottom groove to his advantage to pick up the win.

The STSS Crate 602 Sportsman will race for 25-laps around the three-tenths mile oval in a $1,500-to-win main event.

The Modifieds will also run their American Racer Cup Match races for a $2,000 top prize. The Mohawk Valley Vintage Dirt Modified Series will also be on hand to round out the night.