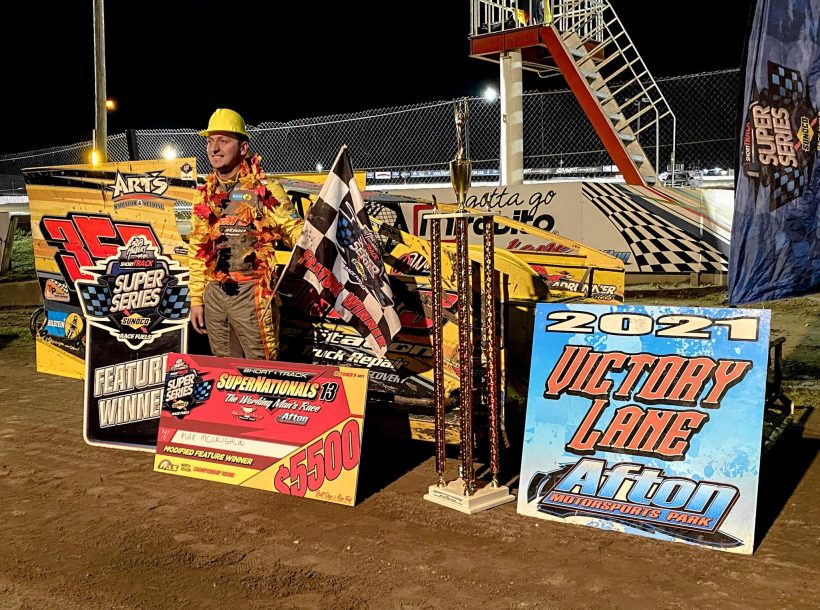 The Mooresville, N.C., native climbed from the 10th starting position to win the 13th edition of the American Racer Cup Short Track SuperNationals in the 50-lap ‘Working Man’s Race’ at Afton Motorsports Park.

McLaughlin’s triumph aboard the Norm Hansell-owned No. 357 netted the group a $5,500-plus payday. ‘Mad Max’ is now the 13th different winner of the ‘Short Track SuperNationals,’ giving the race 13 different winners in 13 editions.

A lap-two tangle that included three top-10 runners, slid several drivers – including McLaughlin – up multiple positions in the early going.

When racing resumed, Haas jumped back out in front while Johnstown, N.Y.’s Bobby Varin had risen from eighth to third in his Tyler Siri-owned racecar.

At lap 13, the leaders caught lap traffic, bunching the top six together.

Varin continued making moves, sliding underneath Billy Pauch Jr. on lap 15 and turning his attention to the leader Haas.

The lead cars were reset for a lap-16 caution, and again Varin pounced on an opportunity. Haas bobbled on the restart and Varin used the outside to drive around Haas for the lead.

Haas faded back to fourth behind Pauch Jr. and Pipersville, Pa.’s Danny Bouc.

Meanwhile, Billy Jr. went on the attack on the hectic restart, getting underneath Varin for the lead as the lead pair banged wheels on lap 16 battling for the top spot.

Varin fell victim to the contact with a flat left-rear tire, bringing out the yellow on lap 19. Pauch Jr. was the leader with new challenger Alan Barker alongside on the front row. Danny Bouc and Sheppard, who came from 17th, made up the second row.

McLaughlin raced by Sheppard for fourth on the restart, before another yellow fell on lap 24, one shy of the halfway point. The restart opened the door for McLaughlin’s winning moves.

Restarting on the outside, ‘Mad Max’ went rolled around the likes of Barker, Bouc and ultimately Pauch Jr. in just three laps to lead lap 27.

Despite multiple yellows after taking the lead, McLaughlin was unphased and relatively unchallenged on his way to the victory.

Pauch Jr. raced to second in his Kid Racing No. 15 and Danny Bouc drove his family-owned No. 32 to a podium finish.

Sheppard’s fourth-place finish was good enough to secure him the North Region championship and Alan Barker rounded out the top-five.

Sheffield, Mass.’s Andy Bachetti raced to sixth in the Garrity Asphalt No. 4 with King Ferry, N.Y.’s Mike Mahaney chasing him in seventh. Mahaney was the Upstate Automotive Hard Charger worth $250 coming from 21st. East Greenbush, N.Y.’s David Schilling finished eighth in his 1-800-Got-Junk No. 20 and Varin rebounded for a ninth-place run. Wurtsboro, N.Y.’s Danny Creeden rounded out the top-10 in his RGH Construction No. 16x.

Fifty-three STSS big-block/small-block Modifieds signed in to compete in the ‘Working Man’s Race.’

Sheppard bested Afton track champion Nick Nye in the final to claim the Match race win and add to his already profitable night.

By the end of the race, Hartman Jr. was the winner and Talbot wound up third, and on the bumper of the runner-up, which would have given him the championship.

Hartman Jr., much like McLaughlin in the Modified feature, used the outside line to race to the lead, before switching to the bottom and setting sail with the lead and the win.

Afton Motorsports Park regular A.J. Digsby was the runner-up, the man between Talbot and the championship. Talbot finished on the podium with Dave Rosa and Michael Ballestero rounding out the top five.

Racing resumes October 14-16 for the Short Track Super Series at Port Royal Speedway for the second running of the ‘Speed Showcase 200’ weekend. The STSS Modifieds will race in Round No. 8 & 9 for the Velocita-USA South Region presented by Design for Vision and Sunglass Central, all leading to Saturday’s 200-lap, 50,000-to-win main event for the Modifieds. The STSS Crate 602 Sportsman will also be on hand for Round No. 7 of the Belmont’s Garage South Region in the ‘Speed Showcase 50’ presented by Ice Less LLC for $4,000-to-win.