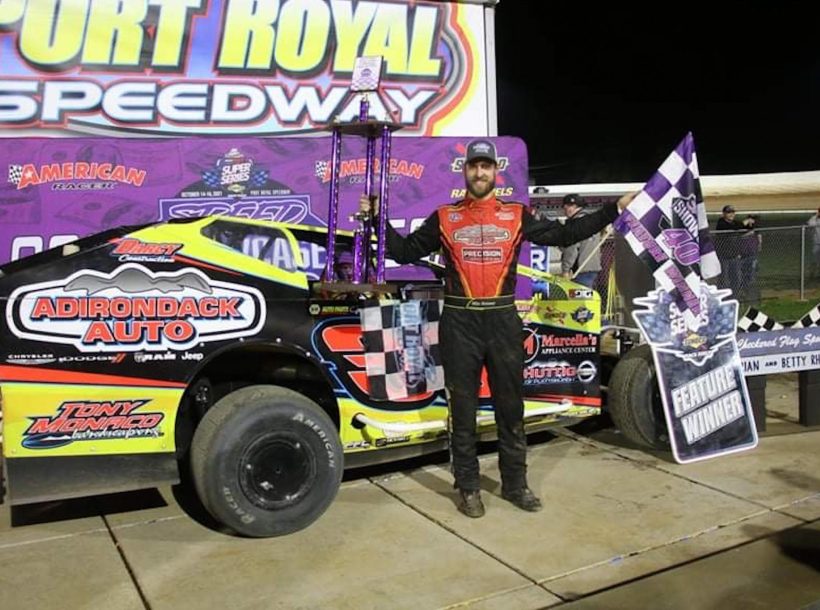 King Ferry, N.Y.’s Mike Mahaney was at the top of the heap at the end of the 40-lap ‘Speed Showcase 40,’ for his first career Bob Hilbert Sportswear Short Track Super Series (STSS) Fueled By Sunoco.

“This is awesome, we didn’t even know if this car was going to make it all 40 laps,” Mahaney said as his car steamed in Victory Lane. “It’s so awesome to be here in Victory Lane.”

Mahaney’s win was not only the first of his career on the STSS, but it also gives the Empire State star the point lead on the Velocita-USA South Region presented by Design for Vision and Sunglass Central heading into Saturday’s ‘Speed Showcase 200.’

The ‘Ringoes Rocket’ Godown used his pole starting position to jump out to the early advantage.

Mahaney, who started fourth, quickly went to work, grabbing third on the initial start and then driving underneath Martz to grab the runner-up spot.

Sprakers, N.Y.’s Stewart Friesen, meanwhile, drove from the 21st starting position into the top-10 in the opening nine laps of the race.

On lap 12, Mahaney picked up a big run off the second corner and drove around Godown to take the lead and the race’s first yellow came out one circuit later, giving Godown a chance to get back at Mahaney.

Canadian Mat Williamson was entering the fray up front on the restart, as the winner of the last two STSS races at Port Royal made it a three-wide battle for a moment before another yellow flag fell.

Friesen continued to charge when the field went back to racing, as the Sprakers, N.Y. native was up to seventh and challenging Pennsylvania native Alex Yankowski for sixth.

Friesen’s ascent ended a few laps later on lap 28, as his Halmar International No. 44 came to a stop on the front straightaway, ending his night.

On the lap 28 restart, chaos ensued. Mahaney jumped out to the lead, while Williamson and Godown made contact racing for second. Williamson dove underneath Godown on the restart and the two collided working off turn four.

Godown chased Williamson, desperately trying to get back by for multiple laps before Williamson pulled away from Godown for second.

The remaining 12 laps went caution-free, and Mahaney drove away with his first career STSS triumph. Mat Williamson showed he will continue to be a factor at the ‘Speed Palace,’ picking up a runner-up finish and Ryan Godown rounded out the podium.

After the race in Victory Lane, Williamson and Godown got into a brief shoving match, disagreeing over the way things on the restart.

Alex Yankowski finished in fourth in his family-owned No. 84y and Boyertown, Pa.’s Ryan Watt rounded out the top five in the Ron Roberts Racing No. 14w.

Oley, Pa.’s Craig Von Dohren authored a steady drive in the No. 1c and Larry Wight rounded out the top-10 in his Gypsum Express No. 99L.

Fifty-three STSS big-block/small-block Modifieds signed in to compete in the ‘Speed Showcase 40.’

Krummel – the defending winner of the ‘Speed Showcase 50’ – and Kohler locked themselves into the redraw for Saturday’s $4,000-to-win feature.

The Empire State based Pro Stock division took part in three practice sessions as well, before their ‘Speed Showcase 30’ event.

Racing resumes tonight for Bob Hilbert Sportswear Qualifying night. The STSS Modifieds will race in 20-lap Qualifying Races, while the STSS Crate 602 Sportsman will run 15-lap Qualifiers. The Pro Stocks will run a full program, rounding out their night with a 30-lap feature event.