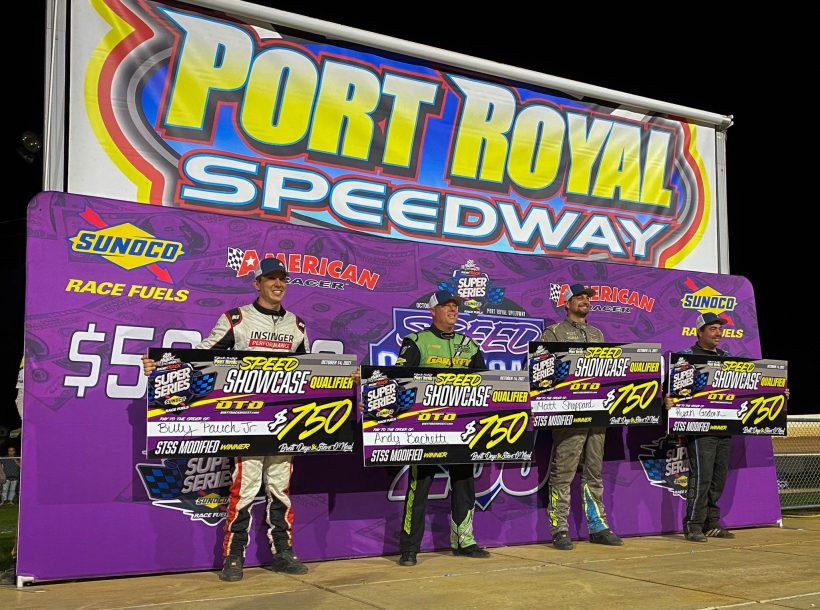 The STSS big-block/small-block Modifieds competed in four 20-lap qualifiers, locking 24 drivers into the $50,000-to-win main event tonight and sending the rest into the Last Chance Qualifiers.

Sheffield, Mass., star Andy Bachetti started on the front row of Qualifier No. 1 and never faced a serious challenge for the top spot. Neshanic Station, N.J.’s Matt Stangle raced to second on a lap-14 restart and Boyertown, Pa.’s Ryan Watt rounded out the top-three.

Savannah, N.Y.’s Matt Sheppard raced from the ninth starting position in Dirt Track Digest Qualifier No. 2 to win the 20-lap affair. Sheppard went from ninth to third in the opening three laps, before methodically working by Peter Britten and Joseph Watson to win the second qualifier.

Ronnie Johnson held on to the runner-up spot, fighting off King Ferry, N.Y.’s Mike Mahaney, who started last and raced his way to third.

Frenchtown, N.J.’s Billy Pauch Jr. put on a clinic in Dirt Track Digest Qualifying Race No. 4, coming from the eighth position to dominate the final 20-lap affair. The ‘Kid’s Kid’ was to the lead by the halfway point of his qualifying race, and never looked back, winning by over two seconds.

The top six in each STSS Modified qualifying race locked themselves into the ‘Speed Showcase 200,’ with the rest having to race through the last chance qualifiers.

Sixty-two STSS Crate 602 Sportsman made up five Belmont’s Garage qualifying races. Each of the winners received $200.

The top five in each qualifying race locked themselves into the Ice Less LLC ‘Speed Showcase 50.’

Horning was the first car in the field to venture to the outside, using that to his advantage to drive to the front and pick up the historic victory and the $1,600 payday to boot.

The ‘Speed Showcase 200’ weekend concludes tonight. The STSS Modifieds and STSS Crate 602 Sportsman will run B-Mains to determine the final qualifiers for their respective features.

The Ice Less LLC ‘Speed Showcase 50’ will be up first in their $4,000-to-win feature event. The ‘Speed Showcase 200’ rounds out the weekend as the STSS Modifieds go for 200-laps and $50,000-to-win in one of the biggest events in Northeast Modified racing.