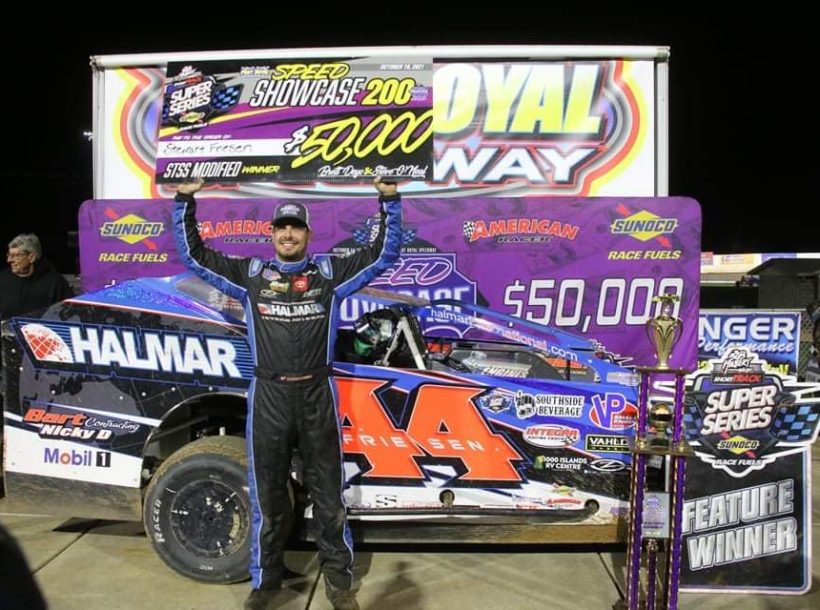 The win was Friesen’s 32nd career Bob Hilbert Sportswear Short Track Super Series (STSS) Fueled By Sunoco victory. It was also his second $50,000-plus triumph in the last month, after he claimed the ‘Fonda 200’ back on September 18 at Fonda (N.Y.) Speedway.

“It feels good to finally get a win here, this place has bit us so many times, and I just owe it to my awesome race team,” said Friesen of his first career triumph at the ‘Speed Palace.’

Friesen’s run to the checkered began from the 15th position, while Covington Township, Pa.’s Alex Yankowski and Brisbane, Australia’s Peter Britten brought the field to green.

Yankowski, who started on the pole for the second year in a row, quickly rocketed out to the early lead and set the pace.

The top-three exchanged the lead multiple times before Sheppard took it for good on lap 17 and began to run away with the top spot.

Sheppard remained out front and relatively unchallenged until Stewart Friesen and Potsdam, N.Y.’s Mike Maresca began to make their presence known in the challenge for the lead.

Lap 53 saw Friesen slide underneath Yankowski for the runner-up spot and Maresca got around Yankowski on a restart a couple of laps later.

Friesen’s challenge for the lead began on that restart, as Sheppard was on the top, in Friesen’s preferred groove forcing Friesen to drop to the bottom.

Friesen was finally able to make the bottom work and drive underneath Sheppard on lap 74 and never looked back to the halfway break.

When the green and white flag flew on lap 100, Friesen had picked up the $200 Danny’s Pizza Pizzazz halfway bonus, with Sheppard and Maresca rounding out the top three.

Multiple yellows, including one red flag that came just shy of the halfway break gave multiple cars opportunities to pit just before the lap 100 stoppage.

Drivers “short-pitting” threw a curveball on the lineup. Friesen restarted the second half of the feature from the 13th position, as 12 drivers elected to stay on the speedway and take fuel only.

Phoenix, N.Y.’s Larry Wight was the first driver to stay on the track, giving him the lead when the field went back to racing. Wight’s lead however was short lived, as it took Friesen just 21 laps to climb from 13th to the runner-up spot.

A restart and a couple laps of racing was all Friesen needed from there, taking the lead away for good on lap 125.

Despite multiple restarts and several challengers including Maresca, Matt Stangle, and Sheppard late in the race, Friesen was up to the task every time.

Friesen drove on to win the ‘Speed Showcase 200,’ which served as Round No. 9 of the Velocita-USA South Region presented by Design for Vision and Sunglass Central.

Maresca was one of the few other drivers who pitted at the halfway break and was able to drive his way forward like Friesen. Unfortunately for Maresca, battery issues plagued him and ended his night on lap 167 while running second.

Sheppard, who struggled for much of the second half of the race, made the right adjustments on a pit stop inside of 50 0laps to go to make his forward for the runner-up spot worth $20,000.

Neshanic Station, N.J.’s Matt Stangle brought his family-owned No. 6 car home with an impressive third place finish. After cycling forward following the halfway break, Stangle hung with the front-runners for the entirety of the last 100 laps. Stangle earned $10,000.

Ringoes, N.J.’s Ryan Godown was one of the most consistently fast cars all weekend and that propelled him to a fourth-place finish and Boyertown, Pa.’s Mike Gular used a late-race charge for a top-five in the Terry Fasnacht-owned No. 2A.

King Ferry, N.Y.’s Mike Mahaney salvaged a sixth-place run in the George Huttig-owned No. 35 after struggling for much of the first 100 laps. Edwards, N.Y.’s Tim Fuller brought the St. Lawrence Radiology No. 19 to a solid seventh-place run and St. Catherine’s, Ontario, Canada’s Mat Williamson held on with a left-front flat tire in the late stages for an eighth-place finish in the Behrent’s Performance Warehouse No. 3.

Saratoga Springs, N.Y.’s Jack Lehner finished in ninth in his family-owned No. 2 after starting from 29th and Belle Mead, N.J.’s Brandon Grosso rounded out the top-10 in his Grosso Homes no. 32.

Sicklerville, N.J.’s Stephen Kemery was the big winner of Round No. 7 of the Belmont’s Garage South Region in the Ice Less LLC ‘Speed Showcase 50.’

Kemery started from the outside of the front row alongside Georgetown, Del.’s Sean Metz.

Several yellows in the first two laps of the race delayed the Sportsman from getting going, but the field went 48 laps non-stop to finish the race.

Middletown, N.Y.’s Brian Krummel challenged Kemery from the lap-four mark all the way to the checkered flag, but never once made a pass on the Garden State driver.

Kemery earned more than $4,000 for his efforts.

Krummel was forced to settle for second and Newtown, Pa.’s Joe Toth took a firm hold of the South Region point lead with just one race remaining with a third-place run.

Flemington, N.J.’s Cole Stangle charged from the 24th starting spot to get fourth and Walnutport, Pa.’s Tanner Van Doren emerged from 16th to round out the top-five.

The two, along with Payton Talbot and Chad Edwards, put on a classic duel for fourth through seventh in traffic, sprawling across the racetrack for position in traffic.

Racing resumes October 22 for the Short Track Super Series at Orange Country Fair Speedway for the ‘Hard Clay Finale.’ The Modifieds run in a non-points race under North Region rules to kick off Eastern States Weekend at the ‘House of Power.’ The event will be 50-laps for $5,000-to-win and $500-to-start.