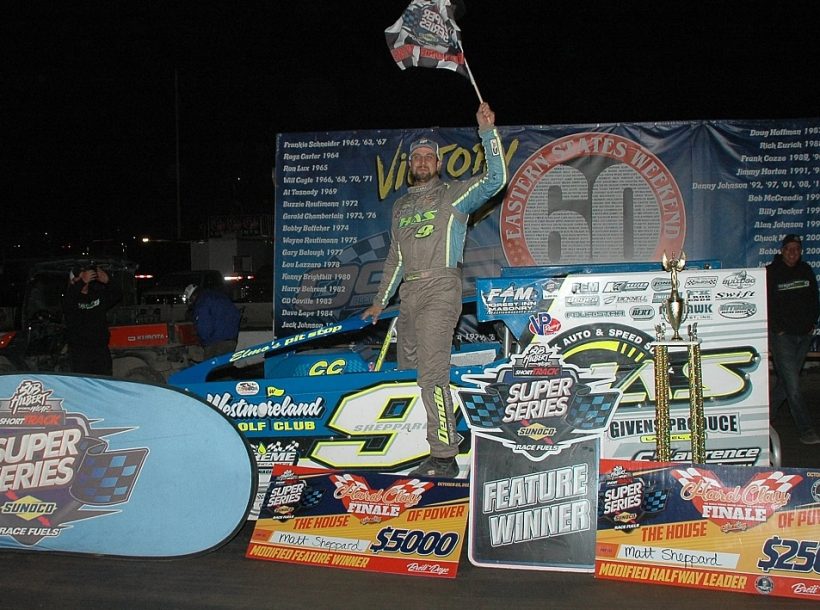 Savannah, N.Y.’s Matt Sheppard emphatically picked up the $5,939 payday after leading all 50-laps in the ‘Hard Clay Finale.’

The win was the 20th of Sheppard’s STSS career, and his second STSS triumph at the Legendary House of Power.

The non-points event began with Newburgh, N.Y.’s Jerry Higbie going from the pole with Sheppard along side of him following the Beyea Custom Headers Redraw.

Sheppard led right from the drop of the green flag off the outside of the front row.

Sprakers, N.Y.’s Stewart Friesen made a charge from his sixth starting position, as the four-time STSS winner at Orange County had reached the runner-up position by lap six and set his sights on the leader Sheppard.

Friesen’s night, however, ended on lap nine when his Halmar International No. 44 slowed with a driveline issue, drawing the caution.

While Sheppard continued to set a torrid pace at the head of the field, Montgomery, N.Y.’s Bobby Flood and East Greenbush, N.Y.’s David Schilling held down the remaining podium positions.

That changed on a lap-27 restart when Schilling charged underneath Flood for the runner-up spot, forcing Flood up the track in the first turn. Flood also lost positions to Anthony Perrego and Mat Williamson.

As the long green-flag run continued, Sheppard began to struggle in slower traffic, bringing the likes of Schilling, Perrego and Williamson within striking distance of the leader.

However, the trio themselves began to take time getting through lapped cars themselves, allowing Sheppard to slip back away for good.

The race for the runner-up spot became a great one, as Perrego, the Middletown, N.Y., native, began throwing the proverbial kitchen sink at Schilling, trying to move to the second spot.

As the trio came to four laps to go, Schilling slipped off the bottom groove, allowing Perrego and Williamson to drive underneath him for the second and third spots, respectively.

For Perrego and Williamson, the charge was too little, too late, as Sheppard was long gone, dominating the kickoff to one of racing’s most lucrative weekends.

Sheppard claimed the win in his Hurlock Auto & Speed Supply No. 9s, with Perrego taking second behind the wheel of the Brian Smith-owned No. 44. Williamson raced to the final podium spot in the Behrent’s Performance Warehouse No. 3.

Schilling claimed fourth in his No. 20, a PMC chassis with a W-16 engine, and Phoenix, N.Y.’s Larry Wight rounded out the top five in the Gypsum Racing No. 99L.

Crate 602 Sportsman graduate Flood raced to a sixth-place finish in the Evergreen Fuels No. 91 and Valatie, N.Y.’s J.R. Heffner grabbed seventh after starting 24th on the grid. Sheffield, Mass., driver Andy Bachetti raced to eighth at the helm of the Garrity Asphalt Reclamation No. 4 with Wallkill, N.Y.’s Tyler Dippel taking the Grand True Value Rental $200 Hard Charger Award, advancing from 29th to ninth in the No. 1 Teo-Pro car. Johnstown, N.Y.’s Rocky Warner rounded out the top-10 in the Jason Simmons Racing No. JS98.

Fifty-four STSS Modifieds signed in to take part in the ‘Hard Clay Finale.’

Racing resumes October 29 & 30 for the Short Track Super Series at Georgetown (Del.) Speedway for the ‘Mid-Atlantic Championship.’ The STSS Modifieds compete in the Velocita-USA South Region presented by Design for Vision and Sunglass Central championship. The event will be 40-laps and up to $7,000-to-win and $400-to-start. It all kicks off on Friday night with ‘Spec’tacular small block Modified 30-lap main event.