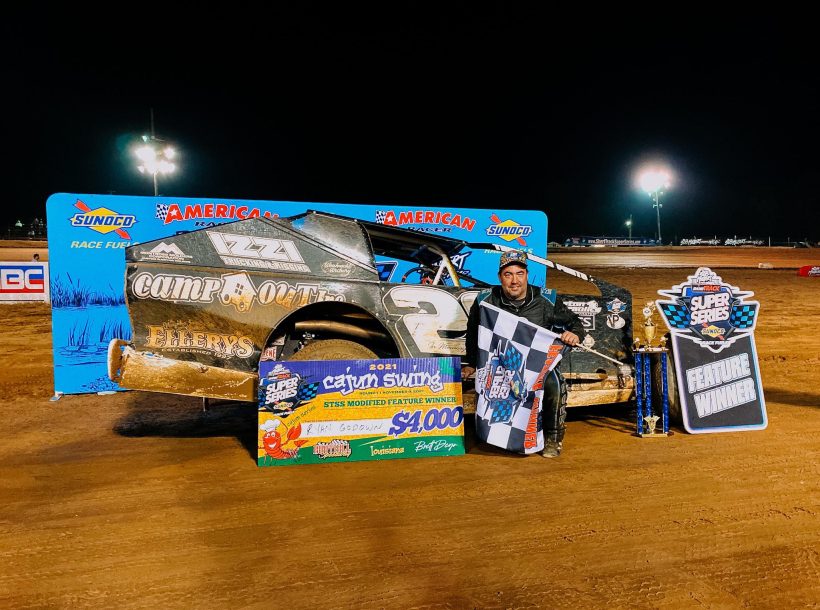 GREENWOOD, LA – Rocketing to the top.

Godown’s triumph, worth $4,000-plus, was his seventh career STSS victory and his first since October 2017 at Georgetown (Del.) Speedway.

Godown’s quest for the ‘Cajun Swing’ opener began from the ninth position, with Johnstown, N.Y.’s Rocky Warner and Saratoga Springs, N.Y.’s Jack Lehner on the front row of the 40-lap main event.

Lehner pounced off the outside of the front row and led in the early going.

It took the leaders just three laps to make their way into heavy lap traffic, as the ‘Ginga Ninja,’ Lehner was expertly navigating his way through the slower traffic with precision.

The first 10 laps clicked off caution-free, before the ‘Cajun Region’ champion, Robeline, La.’s Caleb Dillard slowed to a stop, bringing out the race’s first yellow.

With Dillard off, the field went back to racing and Lehner quickly worked back into slower traffic. This time, Lehner didn’t fare as well.

Warner inherited the lead with Sprakers, N.Y.’s Stewart Friesen pulling up alongside, putting the Fonda (N.Y.) Speedway foes at the front of the field.

Godown’s charge to the front became apparent on a lap-16 restart, racing from sixth to fourth and stalking the top three as the field closed in on the halfway point.

On lap 21, Friesen turned up the pressure on Warner, diving to the inside of him down the back straightaway. The two would race side-by-side under Jimmy McCommas before Warner pushed up the track and made contact with McCommas. McCommas’s car bounced and then flipped, drawing the red flag. He was uninjured.

With the lap not completed, Friesen’s pass was negated and Warner once again controlled the restart.

Godown picked another one off, going around Savannah, N.Y.’s Matt Sheppard for third on the restart before another yellow flew on lap 24. On that restart, Sheppard’s night came to an end, as something in the rear sent the Hurlock Auto & Speed No. 9s around.

The lap-24 yellow was the final one, as Friesen’s pressure continued on Warner for the top spot. Friesen raced underneath Warner for the lead on lap 27, but the back end of the car came out from underneath the Halmar International No. 44, sending him sideways and into the infield.

Friesen rejoined the track and the field in the fourth position, but he surrendered the runner-up spot to Godown and the third spot to Ransomville, N.Y.’s Erick Rudolph.

Godown wasted no time chasing down Warner and using Friesen’s high-to-low move off turn two to get underneath Warner and drive by him for the race lead.

New Jersey’s Godown led the final nine laps to claim his seventh career STSS victory, and the opening night of the 2021 ‘Cajun Swing.’

Rudolph raced to a runner-up finish in his Revive Spine Center No. 25 and Friesen recovered to round out the podium.

Warner dropped to fourth a bent front axle in his Jason Simmons Racing No. 98 and Ballston Spa, N.Y.’s Derrick McGrew Jr. rounded out the top five in his family-owned No. 26.

Heat winners, receiving $50 each courtesy of FloRacing in addition to a $50 ERK Steering gift certificate, were Godown, Decker, Sheppard and Lehner.