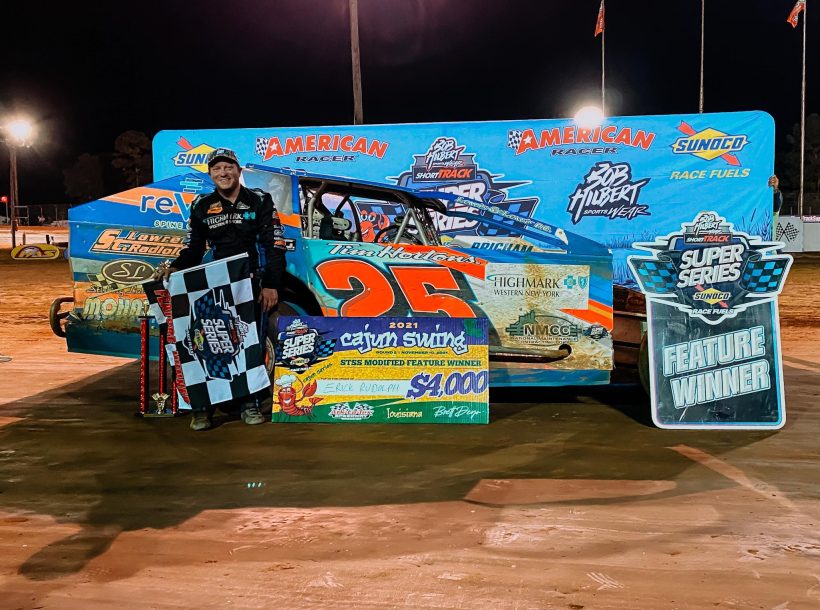 Ransomville, N.Y.’s Erick Rudolph raced to a $4,000-plus payday in Round No. 2 of the Bob Hilbert Sportswear Short Track Super Series (STSS) Fueled By Sunoco ‘Cajun Swing’ at Ark-La-Tex Speedway in Louisiana.

“The track changed a lot during the race… later in the going it seemed like the car came to life,” explained Rudolph of his late charge for the win.

Rudolph’s triumph was the fourth of his STSS career, three of which have occurred outside the STSS home in the Northeast.

After a runner-up finish the previous night, Rudolph is tied with Ringoes, N.J.’s Ryan Godown atop the ‘Cajun Swing’ points standings with three races remaining.

Rudolph’s chase for the Bayou State victory began from the 11th starting position for the second night in a row.

Godown used the topside momentum to take the lead and set the pace in the early going, while Warner raced in second and Ballston Spa, N.Y.’s Derrick McGrew Jr. battled for third with King Ferry, N.Y.’s Mike Mahaney.

After a pair of early yellows, Mahaney shook off McGrew Jr. and brought Sprakers, N.Y.’s Stewart Friesen with him in the battle for third.

Friesen would work by Mahaney and set his sights on Warner for the runner-up spot before a lap-13 caution restacked the field.

Friesen’s assault continued as he worked around Warner on lap 18 and began reeling in Godown as the two carved through lap traffic into the second half of the feature.

Friesen stalked Godown before a moment came that changed the complexion of the race. As the leaders completed the 26th circuit, lapped traffic was three-wide directly in front of the top two.

Friesen darted to the inside of Godown just as Godown was moving to the bottom, both searching for a way by the lapped cars. The contact sent Friesen into an infield tire, breaking his front end and terminating his night prematurely.

The lap-26 restart was when Rudolph suddenly broke into contention. Rudolph restarted from the fourth position and ran his way into the runner-up spot, slipping by Savannah, N.Y.’s Matt Sheppard and Rocky Warner.

From lap 29 to the checkered flag, Rudolph and Godown were trading slide jobs for the Ark-La-Tex win.

Rudolph outdueled Godown and claim Night No. 2 of the ‘Cajun Swing’ for his fourth-career STSS triumph in his Revive Spine Center No. 25.

Godown brought home a runner-up finish in his R&M Motorsports No. 26 and Rocky Warner rounded out the top-three in his Jason Simmons Racing No. 98.

Derrick McGrew Jr.’s up-and-down night ended with a fourth-place finish in his family-owned No. 26 and Vernon, N.Y.’s Willy Decker rounded out the top-five in his No. 1x.

Matt Sheppard finished in the sixth spot after a tumultuous evening in the Hurlock Auto & Speed Supply No. 9s. Mike Mahaney faded to seventh in the George Huttig-owned No. 35 and Jackson, N.J.’s Steve Davis grabbed eighth in his Masker Racing No. 72.

Twenty-nine STSS Modifieds signed in at the gate for night No. 2 of the ‘Cajun Swing.’

Heat winners, receiving $50 each courtesy of FloRacing in addition to a $50 ERK Steering Repair gift certificate, were Decker, Friesen and Rudolph.

With weather approaching, series management opted to move up the starting time for the evening and the main event for the STSS Modifieds was completed by 7:55 p.m.

Did Not Start: Tyler Siri