Right at Home: Godown Continues Louisiana Success with Thursday Victory at the Rev 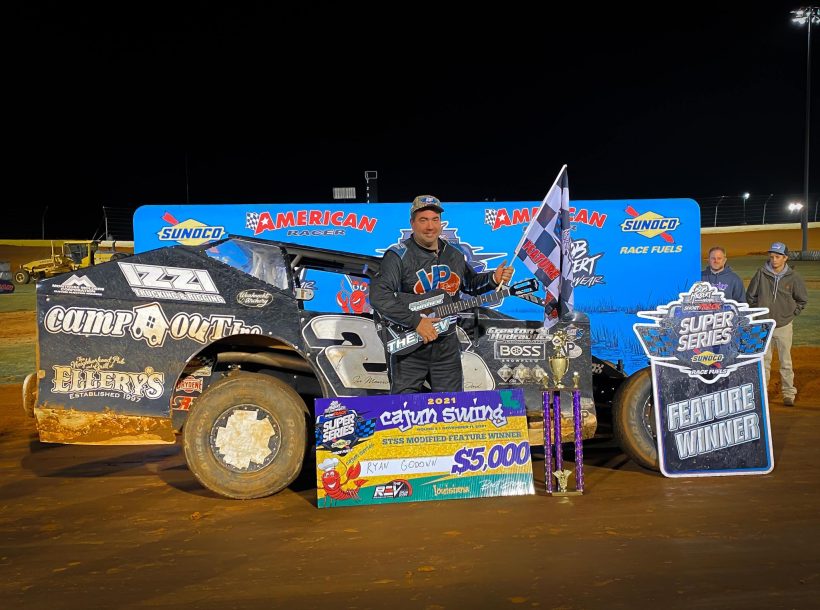 Godown’s win came at one of the country’s state-of-the-art facilities at ‘The Rev’ on Revolution Park in Monroe, La. The event was the first appearance for the STSS and the big-block/small-block Modifieds at the nationally known facility.

“I haven’t seen a dirt track this awesome and this close to Bridgeport (N.J.) before tonight,” explained Godown of his fondness of The Rev and its likening to his home track in the Garden State.

The historic triumph puts Godown in the driver’s seat for the Wegner Automotive championship on the 2021 ‘Cajun Swing,’ having added $5,000-plus to his weekly total for his efforts at The Rev.

Godown’s chase for his second win in three nights began from the outside of the front row, with Ballston Spa, N.Y.’s Derrick McGrew Jr. going from the pole position.

Godown quickly made his way to the top spot and set the pace in the early going. Sprakers, N.Y.’s Stewart Friesen, who started third, made quick work of McGrew Jr. to climb to the runner-up spot and set his sights on Godown.

The race’s first yellow came on lap nine, when Joe Boswell slowed on the front straightaway due to a mechanical failure, and collected Ransomville, N.Y.’s Erick Rudolph, ending his night prematurely.

On the lap-16 restart, Friesen timed Godown’s jump perfectly. Friesen slid up in front of Godown into the first turn, with Godown choosing the top for the restart.

Friesen appeared well on his way to do what he does and drive away with an STSS triumph. However, his lead was short-lived. On lap 18, Friesen’s right-rear wheel came off the Halmar International No. 44 as he entered the first turn. Friesen’s car flipped multiple times but he walked away uninjured.

Mahaney appeared to be one step behind Godown throughout the second half of the feature. Despite multiple restarts, the ‘Ringoes Rocket’ maintained his edge throughout the event, picking up the win in Night No. 3 of the ‘Cajun Swing.’

Mahaney held on for second in his George Huttig-owned No. 35 and Savannah, N.Y.’s Matt Sheppard quietly rounded out the podium finishers. Saratoga Springs, N.Y.’s Jack Lehner brought his No. 2 to a fourth-place finish and Willy Decker rounded out the top-five.

Twenty-nine STSS Modifieds signed in at the series trailer to compete in the first ever Modified appearance at The Rev.

Heat winners, receiving $50 each courtesy of FloRacing in addition to a $50 ERK Steering Repair gift certificate were Lehner, Friesen and Godown.