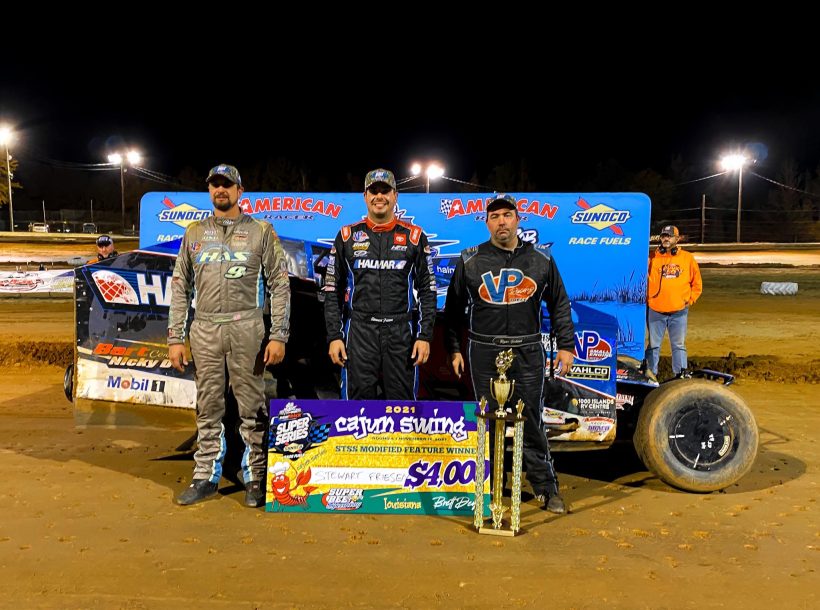 After several tries and close calls, Sprakers, N.Y.’s Stewart Friesen conquered the state of Louisiana, picking up the $4,000 payday at Super Bee Speedway on Friday night.

Friesen’s 33rd career Bob Hilbert Sportswear Short Track Super Series (STSS) Fueled By Sunoco was his first in the Bayou State, after falling out of each of the two features the prior nights.

“It’s been a tough week. I’m proud of our Halmar team, great to finally get a win down here… Matt (Sheppard) made me work for that one,” explained Friesen of his Louisiana conquering.

Friesen and Savannah, N.Y.’s Matt Sheppard wrote another chapter in their history, trading the lead on multiple occasions in the last ten laps.

Decker drifted up off the second turn of the race, and Friesen got a run underneath both Decker and Lehner to take the lead and set the pace on the opening lap.

The first yellow flew on lap eight with Friesen leading and Lehner in second, as Ransomville, N.Y.’s Erick Rudolph looking to get in contention for the top spot.

Rudolph went to work, searching the outside groove for a way around Lehner. As the field came to complete the 12th circuit, Rudolph gained the outside momentum to work around Lehner and get to the runner-up spot.

Rudolph’s charge hadn’t concluded there, as the Revive Spine Center No. 25 was zeroing in on Friesen for the top spot. Rudolph continued to rip the outside, closing to Friesen’s bumper before a lap car stole his momentum on the 16th circuit.

Three laps later, King Ferry, N.Y.’s Mike Mahaney slowed to a stop on the back straightaway due to rear-end trouble. Under the yellow flag, Rudolph’s left-front tire went soft, sending him to the pits for a tire change.

Sheppard was becoming a factor, rising to the third spot and challenging Lehner for the runner-up spot.

Sheppard worked by Lehner on lap 21 and brought Ringoes, N.J.’s Ryan Godown with him into the top-three.

Multiple yellows between lap 27 and lap 31 brought the races momentum to a halt with Sheppard continuing to pressure Friesen for the top spot.

The lap-31 yellow would be the final caution of the race, setting up nine laps of a historic chapter in the Friesen-Sheppard rivalry.

Sheppard pounded the outside groove, finally getting the momentum he needed to work around his nemesis for the lead off turn two. Friesen answered the bell in the following corner, sliding up in front of Sheppard to take the lead back at the start finish line.

Sheppard took the lead on the back straightaway to lead the 37th circuit, which would be the only lap Friesen wouldn’t lead in the 40-lap main. A lap later, Friesen retained the lead and cleared two lap cars, appearing well on his way to pick up the win.

Sheppard, however, wasn’t ready to quit. ‘Super Matt’ pulled up to within two car-lengths of Friesen heading into the final corner. Sheppard made one last-ditch effort on the inside of turns three and four, but Friesen’s topside momentum carried him to his first career Louisiana triumph.

Sheppard came across the line a car-length short with a runner-up and ‘Cajun Swing’ point leader Ryan Godown rounded out the podium finishers.

Jack Lehner ended up with a sixth place run in his family-owned No. 2 and Ballston Spa, N.Y.’s Derrick McGrew Jr. also recovered from a mid-race collision to come seventh.

Twenty-six STSS Modifieds registered at the trailer for the fourth night of the ‘Cajun Swing.’

Heat winners, receiving $50 each courtesy of FloRacing in addition to a $50 ERK Steering Repair gift certificate were Willy Decker, Mike Mahaney and Rudolph.

Did Not Start: David Forbis