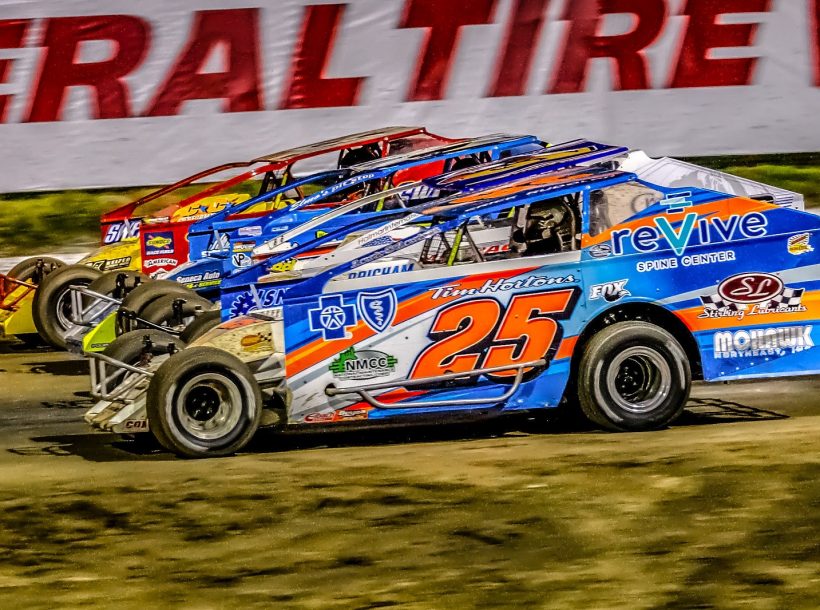 “It’s unbelievable,” Billy Pauch Jr. glowed. “Between this, and his (STSS director Brett Deyo) partnership with Flo, it is making Modified racing as popular, nationally, as ever,” Pauch added.

“My first thought? How the hell does he pull this off,” Brett Haas excitedly shouted. “I have no idea how he comes up with all this money, but you can’t say no to racing for $25,000 on a consistent basis,” Haas said.

“Races like these help race teams go,” Erick Rudolph explained. “With how well these races pay throughout the field, they really can give a major boost to your program.”

Three-time series champion Ryan Watt said more of the same: “It’s historic to see a full series like this.” He added, “Usually each track has their own big race once a year, but this series is combining them all under the same roof for a $25,000 championship, plus adding to each race’s purse. It’s foolish if you don’t follow the money.”

“It’s just awesome,” Andy Bachetti, another three-time champion, said. “Chasing races like these is the reason why we race and what we do all the traveling for.”

“It makes you happy that someone is trying to put races like these together and giving back to drivers and teams,” teenager Alex Yankowski mentioned. “It (the STSS) already had the best pay throughout the field and these races just takes that to another level.”

The Short Track Super Series, which already sanctions the Cajun Series that travels to tracks in Louisiana and Texas, has visited 28 tracks in its history, and continues to develop its footprint outside of the traditional Northeast.

“Cherokee is the first thing that stood out to me,” Watt said. “Going to new places and new tracks are fun and make me a better, more versatile driver,” he explained.

“South Carolina is a long hike, but racing for real money like what the Late Model guys do, makes it so much more worth it,” Bachetti said. “With his (Brett Deyo’s) races, even if you have a bad night, you can walk away with a tire, or at least $1,000 if you run in the top 10.”

For the six-race Halmar International Elite Series, the standard purse will pay $1,000 for 16th.

“It’s obviously costly to travel, but Brett (Deyo) does everything in his power to make it affordable by putting racer’s needs in front of his own,” Haas said. “The money is spread out throughout the field, and it can be a season-changing amount of money if one night goes your way.”

Pauch Jr., who won twice on the tour in 2021, is happy with the selection of tracks, even if he doesn’t have a ton of laps at some of them. “Brett is really big on track prep and picking places that are racy and don’t rubber up,” he said.

“I’m very excited to get started and think we can make a run at the championship if we have our ducks in the row,” Pauch Jr. said.

Rudolph, winner of at least 10 races in each of the last six years, is excited for the year to come.

“I race with the STSS because it is run in a professional manner and I enjoy going to different, neat tracks,” he said. “Traveling outside of the Northeast for this much money really brings attention to the Modified racing industry as a whole, and really brings exposure to the drivers, the cars and the sponsors to make it even better.”

For the second year in a row, all of the events on the Bob Hilbert Sportswear Short Track Super Series Fueled by Sunoco North and South Region tours, in addition to the Halmar International Elite Series races, will be broadcast live on FloRacing.

“With the Flo deal, Modifieds are as popular as ever,” Pauch noted. “Normally, we sell shirts and apparel mostly in the northeast region, but lately, our stuff has sold a lot more nationally, thanks to this.”

“We have a lot more fresh eyes on our sport,” Rudolph said. “It’s easier to market, get sponsorship and also get more people to see those names on our cars.”

“For the fans at home, too, it makes our races more accessible,” Rudolph added.

“The Flo (partnership) makes this deal grow even more, really,” Yankowski said. “It’s always good to have that many people watching our races, it helps drivers, teams, sponsors and fans… it’s just a good deal overall.”

“My owner Ronnie (Roberts) doesn’t go to all of the races all the time, but he’s able to still watch and see that his car is a part of a major race like these,” Watt discussed. “It’s just good for the sport as a whole.”

“The more you travel, the more money and people you need,” Bachetti mentioned. “Flo will change the game helping you pick up major sponsors to absorb the cost and get a lot more people watching us.”

“This is just elevating our sport as a whole,” Haas concluded. “The odds (of winning) go up the more races you can run, so the Elite Series gives you six chances for a season-changing weekend.”