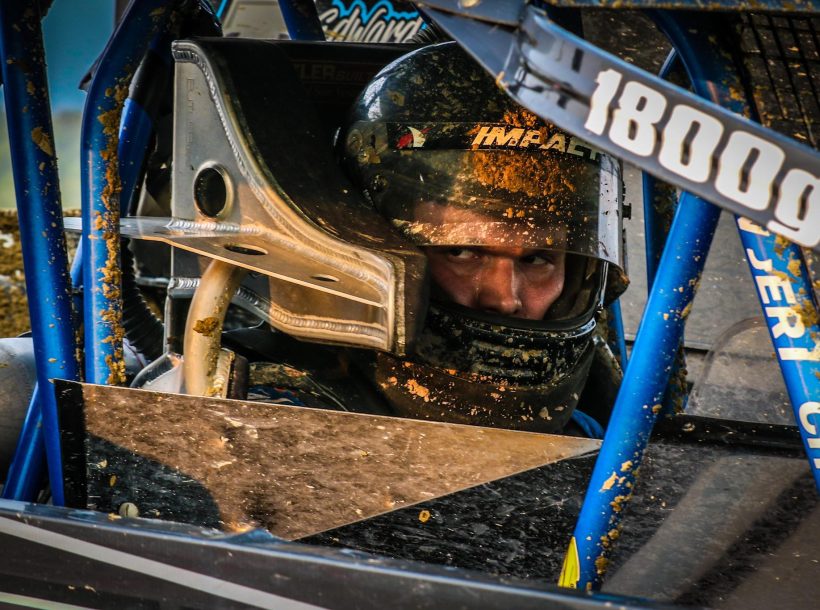 The Bob Hilbert Sportswear Short Track Super Series (STSS) Fueled By Sunoco was wrapping up its inaugural Sunshine Swing at the All-Tech Raceway when Schilling, who qualified through the night’s B-Main, rolled off from the 25th starting spot with 50 laps and a $10,000-to-win prize on the line.

Twenty laps in and the East Greenbush, N.Y. native, aboard his 1-800-GOT-JUNK-sponsored No. 20, was ripping through the field and rolled into the seventh position with still more than half the race left. Not much later, he disposed of another competitor, inching one more position closer to the front before a flat tire sent him to the rear.

“I tried to be a superhero coming back through,” Schilling remembered. “On a restart, everyone fanned out, I jumped a right rear and that was that.”

After a wild flip, Schilling ended up caught in the first-turn fence, ending his week and starting his 2020 season on a low. Less than two months from today, Schilling will excitedly return to the scene as the STSS once again invades All-Tech Raceway for the second time in three seasons.

“It’s cold as hell in New York,” Schilling said with a laugh. “Racing in Florida sounds like a lot more fun than sitting up here.”

Everyone has their reasons for making the trek south, but for Schilling it’s a welcomed break in the offseason.

“In the offseason, you work on your program and think on some things that you can put forth down there,” he said. “Florida is a good opportunity to really test out your stuff.”

Toward the end of the 2021 campaign, Schilling finished with momentum, scoring a sixth-place result at the Short Track SuperNationals hosted at Afton (N.Y.) Motorsports Park before notching a fourth at the STSS-sanctioned Hard Clay Finale at the Orange County Fair Speedway in Middletown, N.Y.

“We built a brand-new PMC car for the end of this season and we are really excited about it heading into 2022,” Schilling explained. “I really should’ve finished second at the Hard Clay, but a driver error dropped me to fourth.”

“We went above and beyond with this car,” he continued. “Pete (Chuckta, owner of PMC Race Cars) builds an unbelievably nice racecar… it has a ton of potential and that’s part of the reason why we are so excited to get down there.”

For the February flock to the Sunshine State, Schilling will be dropping in the new Wegner Automotive “Weekend Warrior” LS 427 motor.

“I think All-Tech is a good test and a great track to try it out at,” Schilling analyzed. “It (All-Tech) is smooth and gets pretty slick, so drivability is important; and I believe this motor is super drivable.”

Schilling, who competed regularly in New York State at the Utica-Rome and Fonda Speedways in 2021, will drop the weekly racing and will prioritize a more focused, targeted schedule in 2022.

“I’m getting back to racing for fun and using it as a competitive outlet, rather than planning my life around it,” Schilling justified. “I’m still going to race a bunch, starting with Florida, but three nights a week really caught up to me. I want to balance my life with racing.”

His new approach will feature a slew of STSS races, beginning at All-Tech.

“Brett (Deyo, director of the STSS) is changing the game and forcing the hands of the rest of dirt Modified racing,” Schilling surmised. “This is really awesome for everyone.”

“It’s no secret these (STSS) races are where people want to be,” he added. “It’s good to see the sport growing.”

Some of that growth of dirt Modifieds can be attributed to the STSS’ partnership with FloSports.

“This Flo deal is great,” Schilling agreed. “It puts us on a national stage and allows people who don’t even know who we are to tune in because they opened up their Flo app.”

“For me, personally, it’s great because my mom can sit home and watch… my family, my grandmother, they all their Flo accounts and it gives them the chance to watch me,” he continued. “I’m really glad it’s happening again and that we can showcase our stuff.”

Schilling, along with the rest of the STSS stars, will open the season on Tuesday, Feb. 8 for an open practice at All-Tech before diving into four straight nights of racing culminating in an $8,000-to-win event on Saturday, Feb. 12.