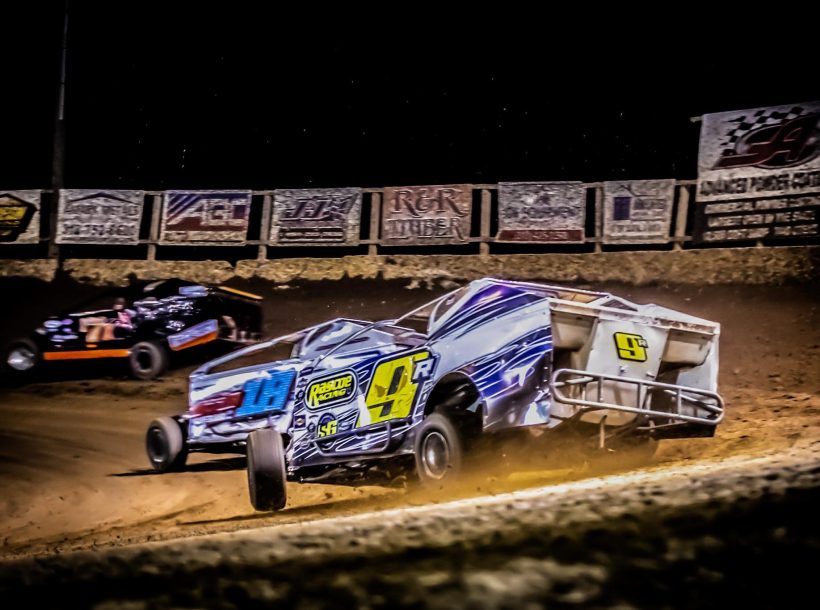 LAKE CITY, FL – If anyone at next month’s ‘Sunshine Swing’ epitomizes the growth and national sprawl of the Northeast dirt Modifieds, it’ll be Converse, La.’s Tommy Rascoe.

Rascoe, who took a 15-year hiatus from racing entirely, thought he had strapped in for the last time in the early 2000s. With the swelling of the Modified’s popularity in his home state, however, he re-joined the fray.

“I always wanted to race,” Rascoe explained. “When I graduated high school in 1990, my aunt found me a Ford Pinto, we started building it and away we went.”

Over the next decade-and-a-half, Rascoe progressed through the ranks, and eventually competed in IMCA and UMP Modifieds until, all of a sudden, he was done. Fifteen years later, in 2021, he was back in the saddle and battling for the inaugural STSS Cajun Region championship, all while logging thousands of miles from western Pennsylvania to the Ark-La-Tex region.

Rascoe began his journey in Modifieds with a crate engine during the inaugural Cajun Swing toward the end of 2020. He kept the crate in for the trek to Florida for last year’s Sunshine Swing, but his week ended prematurely when he blew up.

After returning home to ready for the 2021 season, he dropped in a spec motor he picked up from New York car owner Jake Spraker and the chase was on to make history and capture the first STSS Cajun Region series championship.

“I had never won a championship in my life,” Rascoe mentioned. “I said I wasn’t going to race for points because of work and the travel, but then the season started,” he joked.

At the Cajun Region season opener at Super Bee Speedway (Chatham, La.), Rascoe finished second to good friend Cody Robbins and ahead of Caleb and Greg Dillard. Later that month, he outdueled both Dillards to score the win at Thunder Valley (Glenmora, La.) and snatch the point lead away.

At first glance, the Cajun Region doesn’t seem too difficult to follow with races strategically placed throughout the calendar. But for Rascoe, who worked during the week in western Pennsylvania, the path to race day was hardly a walk in the park.

“I’m really blessed to make the whole season without suffering a major break or anything, especially with my schedule and limited time to work on the car,” he thankfully added.

With the point lead in tow, Rascoe added five more top-five finishes to his tally by the end of August.

“When I was leading the points, I told myself ‘I can’t stop now,’” Rascoe joked about his trips back and forth from Pa. to La. Eventually Caleb Dillard wrestled away the lead and the championship, but Rascoe concluded his season with eight top-five results – five inside the top-three – a win, and a runner-up finish in the season-long points chase.

“It was a really good, fun year,” Rascoe remembered. “I’m still learning these cars, but overall, it was a great year for me and for the series.”

When the Bob Hilbert Sportswear Short Track Super Series Fueled By Sunoco ventures to All-Tech Speedway in Lake City, Fla. for the third annual Sunshine Swing Feb. 8-12, an education is on the top of Rascoe’s list of goals.

“I just want to make as many laps as I can, hopefully make every feature, and just learn from them guys,” Rascoe said.

“At The Rev (Monroe, La.) during the Cajun Swing, I was running my car all wrong,” Rascoe said with a laugh. “I started following guys like Rocky (Warner) and (Derrick) McGrew Jr. and learned how they just rolled it in through the center of the turn.”

“Experience like that is why I’m so excited to get to Florida.”

A stout field is expected to flock south for what has become a lucrative preseason for the Northeast contingent, but Rascoe is thrilled for what’s to come.

“There will be a lot more competition so you really have to be on top of your game,” Rascoe admitted. “But, we are going to have a good time, hopefully make the show and watch and learn.”

With a brand-new body on its way from up north, Rascoe will return to his racing roots as he dons his traditional No. R21 from his early days in the sport, stepping away from the No. 9 he used last season. Additionally, he added another a new engine to his fleet late in 2021 after purchasing an open 360, also from Spraker.

“I’ve got the old number back, a whole new look, a new body… I’m really excited,” he said. “With the big motor on the big track, it’ll probably be the fastest I’ve ever gone.”

Like Rascoe, the rest of the Ark-La-Tex region seems to be enthralled with the new, blossoming class from the Northeast.

“It’s been an eye opener for everyone down here,” he said. “People don’t really know the cars or realize the difference in speed, but they’re definitely starting to notice.”

While tuning up for the Cajun Swing late last year, Rascoe practiced at Boothill Speedway (Greenwood, La.) and turned some heads of the locals.

“People kept coming up to me and saying ‘My god you were flying,’” he recalled. “I laughed and said ‘You wanna see fast? Come back next week and watch them!’”