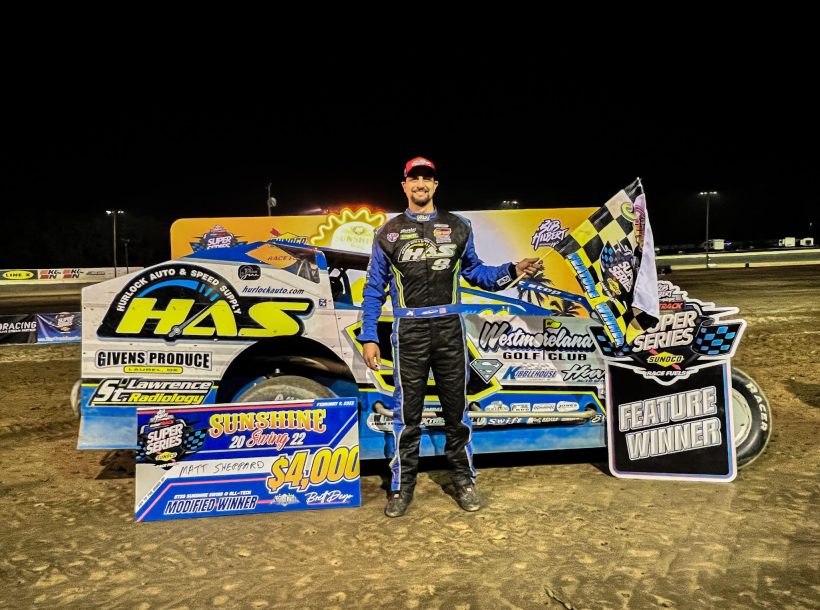 The win is Sheppard’s 22nd in STSS competition – the second-most in series history – and All-Tech joins 15 other tracks that he’s conquered under the STSS umbrella.

“What a wild one,” Sheppard said in victory lane. “What a fun race track; smooth, wide and slick, just a heck of a place.”

On an incredible racing surface, Maresca launched out front to lead the opening lap ahead of Marc Johnson, Pauch Jr., Sheppard and Rick Laubach. Just two cautions interrupted the 30-lap feature, with the first coming only three circuits into the feature.

Sheppard, who capitalized on both yellow flags during the race, rocketed around the top from fourth to second on that lap-three restart, and began his hunt of Maresca. Shortly after, Pauch moved past Johnson for third.

On lap seven, with Sheppard stalking the leader’s every move, Maresca shifted lanes, shooting to the outside and blocking off Sheppard’s momentum. Meanwhile Stewart Friesen slipped around Tyler Siri for sixth and then Jeff Taylor for fifth.

On lap 10, a third of the way into the race, Maresca and Sheppard hit lapped cars, which initially favored the leader, aboard his family-owned No. 7mm. After Maresca put multiple cars between he and second-place Sheppard, he made contact with traffic, sliding up to the wall between turns three and four.

The door was open and Sheppard stepped through, leading lap 12. It wouldn’t come easy, though.

Maresca bunkered down and battled back, eventually snatching the lead away off the bottom of turn four on lap 16. The two swapped leads a few more times over the next handful of laps, but the battle of titans up front allowed Pauch and fourth-place running Johnson to close. With less than 10 to go, all four were running nose to tail and, coming to five to go, Pauch drove around Maresca for second.

With a head of steam down the backstretch, Pauch buried his No. 96 in on the bottom of turn three while Sheppard skated up the track in heavy lapped traffic. Just before they hit the line, though, the caution flag flew for Friesen in the wall, putting Sheppard out front on the single-file restart with five to go.

“Sometimes we end up on the bad end of a few cautions or lapped cars,” Sheppard said. “But tonight it went our way. Billy got by me but that caution saved me; I really wanted to see open race track.”

Sheppard fired off extremely well with five to go and immediately put distance between him and Pauch, driving to the first win of the 2022 season.

“I thought I had one tonight,” Pauch said on the homestretch. “My RF finally fired and we got really good, but on that final restart it took a bit to fire again.”

After Maresca pulled off before the restart with five to go, Johnson rounded out the podium in third.

“That was pretty fun,” he mentioned. “I was racing hard with Pauch and then we saw both of the leaders coming back to us, I thought we might’ve had something, but we’re happy with third.”

Erick Rudolph, who battled inside the top 10 all night, finished fourth with Larry Wight rounding out the top five; Wight went to the rear on that lap three caution, but came flying back through the field, advancing 18 positions over the final 27 laps with only one caution to bunch the field.

Finishing sixth through 10th, respectively, were: hard-charging Jordan Watson, who maneuvered from his 28th starting spot; the ‘Doctor’ Danny Johnson aboard his iconic No. 27J; Taylor, who captured a heat race victory; B-Main winner Peter Britten; and Billy Decker.

Chaffee cleared Allen on the final lap of the main to streak under the Sunoco Race Fuels checkered flag. However, a carburetor infraction nixed the win.

Allen was then credited with the triumph over Steve Davis, Jeff Watson, Dylan Madsen and Brandon Watkins. Apparent fifth-place finisher Michael Ballestero was disqualified due to a tire infraction.

The Bob Hilbert Sportswear Short Track Super Series Fueled By Sunoco Sunshine Swing continues tomorrow through Saturday night at the All-Tech Raceway with both the Modifieds and 602 Crates in action.