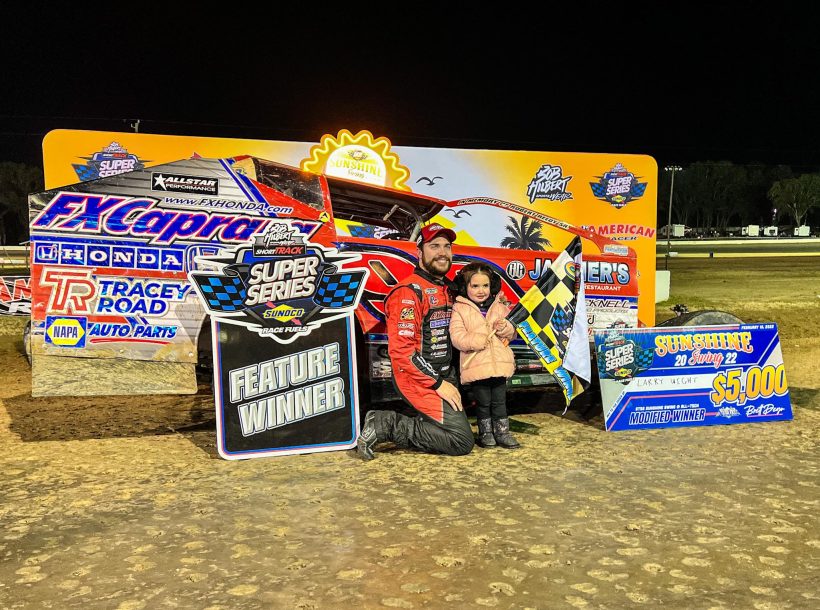 Wight, who rebounded from dead last to run fifth on Wednesday, took a more conventional route on Thursday, quickly launching from his fourth-place starting spot to the lead, a $5,000 paycheck and his first STSS triumph. Wight is the 35th winner all-time in series history.

“We’ve been chasing one of these races for a long time,” Wight said in Victory Lane. “We’ve been really close before with Gary Simpson’s ride, but always caught a bad break or bad luck.

“I’m really happy to get one of these races.”

Wight wasted no time dispensing of the pair of Danny’s and moved into second behind Pauch by lap three. Meanwhile, Erick Rudolph was the big mover, advancing from eighth to fourth in just three circuits. One lap later, Rudolph scooted by Creeden for third.

With Wight checked out, Rudolph closed in on Pauch and then passed him for second by lap seven. The front of the field stayed the same throughout the middle of the race, but by lap 20, Rudolph had clawed to Wight’s rear bumper behind a line of lapped traffic.

Thanks to some late cautions, Wight cruised in open air, crossing the line ahead of Rudolph and Pauch.

“We had a really good piece tonight,” Rudolph commented on the front stretch. “So far, so good to start the season; we still have two more nights to get a win.”

Pauch Jr. bagged his second consecutive podium finish to start the season, cementing himself as one of the premier contenders in the division.

“You hate to go backwards from second, but we had a good car all night,” Pauch said. “This is still one of the coolest tracks out there and hopefully we can put it on the top of the podium by the end of the week.”

Johnson finished fourth, his second top-10 of the week, ahead of Creeden. Finishing sixth through 10th, respectively, were: David Schilling with the Wegner Automotive LS 427 “Weekend Warrior” engine, Siri, Wednesday night’s winner Matt Sheppard, Jordan Watson, who managed his second straight top-10; and Marc Johnson, who followed his podium finish from Wednesday with a 10th-place result.

An apparent first-time victory for Delaware’s Brandon Watkins was nixed in post-race tech inspection due to a helper spring violation. Watkins had led fellow First State competitor Scott Hitchens across the line in the 25-lap, $1,500-to-win event.

Still two nights remain in the 2022 edition of the STSS Sunshine Swing at All-Tech Raceway, beginning on Friday night with $6,000 up for grabs for the 40-lap feature.