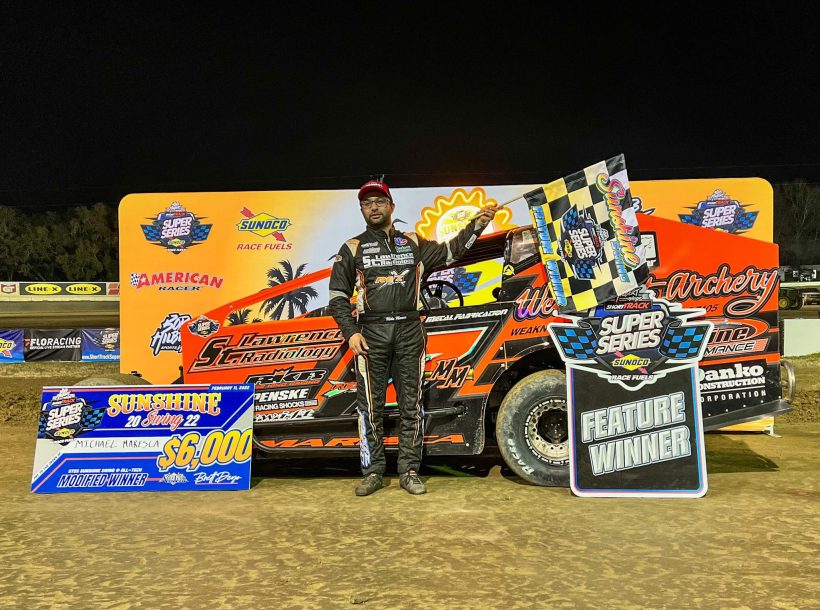 LAKE CITY, FL – Michael Maresca fought off early challenges from Rick Laubach and then later from Larry Wight and Erick Rudolph to etch his name in the Bob Hilbert Sportswear Short Track Super Series (STSS) Fueled By Sunoco record book with a $6,000 triumph on night three of the Sunshine Swing at All-Tech Raceway in Lake City, Fla.

A night after Wight became the 35th new winner in STSS history, Maresca joined him as the 36th different winner under the series banner.

“This is one goal I had for this year,” Maresca commented about his first STSS win in the 40-lap main. “A win this early in this season feels good and sets the tone for the rest of the year.”

After a few early race cautions, Maresca was out front from his outside pole starting spot. Savvy veteran Rick Laubach moved into second by lap nine and was a constant threat on numerous restarts.

On the lap nine restart, Laubach used the top to jump ahead of Maresca and snatch the lead away. Two laps later, Maresca used that same outside groove to grab the lead back.

While Laubach and Maresca shuffled back and forth, the middle of the pack was in a full-fledged battle with Billy Pauch Jr., Wight, Rudolph and David Schilling trading positions.

Laubach again used the top to his advantage on a lap-13 restart to claw back in front of Maresca. That was short lived, however, as Maresca once more pulled the lead back under green-flag conditions.

“It’s fun racing with a guy like Rick,” Maresca said. “I definitely wrote down some of those moves in my head and tried to learn from how smooth he was on the restarts.”

After losing the lead, Laubach immediately took on pressure from Pauch, who quickly scooted from fourth to second in a matter of two corners. By lap 17, Wight and Rudolph followed Pauch by Laubach.

Thursday night’s winner, Wight, began hunting down Pauch and the two perennial top-five finishers from this week waged war for a couple laps while Rudolph snuck into the fray.

One last caution bunched the field on lap 24, but Maresca learned his lesson and fired extremely well, putting multiple car lengths between him and Pauch. After Pauch skated up the track, Wight, Rudolph and Schilling moved into second through fourth, respectively, as Maresca got away.

Wight began stalking Maresca in open track as the lead shrank with under 10 to go.

“We were good tonight, but so tight at the beginning,” Wight said. “I swear it took 30 laps for my RF to warm up,” he joked.

“Mike is a class act, though, so I have no problem trying to chase him down,” he added.

Rudolph settled for third, his second consecutive podium during the Sunshine Swing.

“So far, we’ve been really consistent, on the podium again, which is a testament to this speed wagon we have,” Rudolph said.

Pauch settled for fourth, his third top-five in as many days this week, ahead of a hard-charging Stewart Friesen in fifth.

Finishing sixth through 10th, respectively, were: Schilling, who grabbed another top-10 result this week after starting 21st on the grid with the Wegner LS 427 ‘Weekend Warrior’ engine; Matt Sheppard; Mike Mahaney, who took a provisional and started way back in 28th; Matt Stangle finished ninth and spent much of the 40-lap main in the top 10; and Marc Johnson, who went home with his third straight top-10 finish.

An apparent career-first STSS victory for Johnstown, N.Y.’s Brian Calabrese was nixed in post-race technical inspection. Calabrese fended off the advances of Michael Ballestero in the final laps of the 30-lap, $2,000-to-win main event.

Calabrese’s win was negated due to a rocker arm infraction.

One final night remains in the Sunshine Swing, as the STSS Modifieds will race for $8,000 on Saturday night.