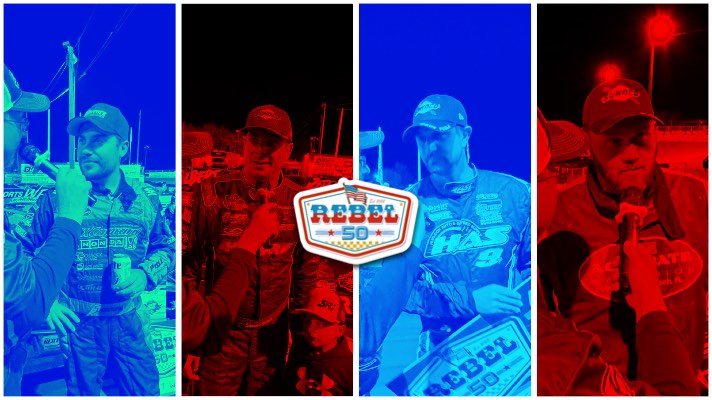 Qualifying Night presented by Penske Racing Shocks is in the books, setting the stage for the ‘Rebel 50.’ The Bob Hilbert Sportswear Short Track Super Series (STSS) Fueled By Sunoco is set for the debut of the Halmar International ‘Elite’ Series.

Fifty-seven STSS big-block/small-block Modifieds participated in four 20-lap qualifying events paying $1,000 to win each (a total purse of more than $20,000). Twenty cars are locked into tomorrow’s ‘Rebel 50,’ with 10 more set to lock in through B-Mains tomorrow.

Danny Creeden started slow in qualifier No. 4 presented by DKM Fabrication; however, the Wurtsboro, N.Y., native found his rhythm, rolling around Darren Smith and driving away with the win. Smith, of Binghamton, N.Y., claimed second and Port Jervis, N.Y.’s Billy Van Inwegen rounded out the top-three.

The top-five finishers in each of the four qualifiers are locked into the Halmar International ‘Elite’ Series debut, while the others will look to qualify through Saturday’s B-Mains.

All 31 cars are scheduled to start the 30-lap main event tomorrow night. The top four finishers in each qualifier are locked into the Beyea Custom Headers Redraw.

Damon Crump, of Charlotte, N.C., timed quickest in qualifying and dominated all 15-laps of the Mid-East Street Stock feature, claiming the $1,000 top prize.

Tomorrow night, B-Mains take place for the STSS Modifieds to set the 30-car field for the ‘Rebel 50.’

The STSS Modifieds race for 50-laps in pursuit of the $25,000 grand prize and the first-ever Halmar International ‘Elite’ Series victory. The STSS Crate 602 Sportsman will run 30-laps for a $2,000 winners’ share.

The Mid-East Street Stocks join the program again along with the SHARP Mini Late Models to round out the program.

All gates open at 2 p.m. for the Saturday program.

John Schneider, the actor who played Bo Duke in the hit TV show ‘Dukes of Hazzard,’ will be on hand for Saturday’s program, with a meet and greet at his merchandise trailer from 3-4 p.m.