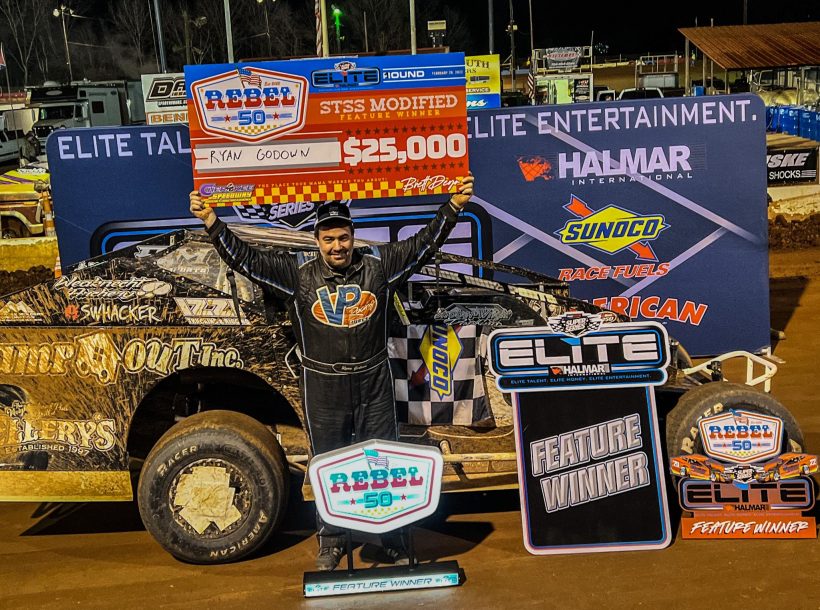 GAFFNEY, SC – Ryan Godown ran down Larry Wight with 11 laps to go and made history at the inaugural ‘Rebel 50,’ hosted at Cherokee Speedway in Gaffney, S.C., becoming the first ever winner on the Halmar International ‘Elite’ Series, a branch under the Bob Hilbert Sportswear Short Track Super Series (STSS) Fueled By Sunoco umbrella.

Godown’s triumph is worth $25,000 – a minimum winner’s purse during the six-race ‘Elite’ Series – and is his ninth in STSS competition overall.

“I’m blown away,” a choked up Godown said in Victory Lane. “I never would’ve thought it… I can’t thank the guys at home enough, I’m nobody without them.”

Godown’s victory is a dream start to the Elite Series after more than 60 cars made the trek to Cherokee from the Northeast.

“This is really fun,” Godown exhaled. “I just wanted to qualify for this race; honestly just being here is really cool.”

Milford, Del.’s H.J. Bunting led the field to the green after redrawing No. 1 earlier in the day, ahead of Bobby Hackel, Wight, Maresca and Ryan Watt, just ahead of sixth-place starter Godown.

Through the first 15 laps, Bunting held a steady advantage of the rest of the field, even gapping Hackel and Wight just before he began to enter lapped traffic. The majority of the pack was content to hold their lines and massage their way through the first portion of the feature event, until Matt Sheppard stepped out of line.

On lap 10, Sheppard rocketed around Billy Van Inwegen for 10th. Sheppard, who redrew position No. 12 out of 12 possible spots, then made his way around Stewart Friesen on lap 16 for ninth.

While the rest of the top ran the bottom, and as the top-five cars closed the gap on Bunting because of lapped cars ahead, Sheppard blitzed the contenders. Just one lap after passing Friesen, Sheppard cruised past Demetrios Drellos for eighth and then by Danny Creeden for seventh on lap 18. Incredibly, Sheppard was around Godown on lap 19 and then quickly around Watt for fifth, ripping around a handful of heavy hitters in as many laps.

When Sheppard entered the top five, the rest of the field collectively said game on. On lap 21, Maresca used the outside to pass Wight for third, but when he missed the groove off of turns three and four the next lap, he lost spots to both Wight and Sheppard.

Just before the halfway point, Wight powered by Hackel for the runner-up spot and Sheppard and Maresca both followed.

The first caution of the night came on lap 25 for Andy Bachetti. At the time, Bunting led Wight, Sheppard, Maresca, Hackel, Godown, Watt, Creeden, Friesen and Drellos. The field made it just two laps before the next caution on lap 27 for Watt, Creeden, Drellos and many others, but Godown made a significant charge. In those two laps, Godown muscled from sixth to fourth around the top and put himself in position for the rest of the race.

“I tried to just ride in the beginning,” Godown said. “But when Sheppard blew around me on the top, I knew I had to get moving and keep pace.”

On the home stretch, Godown mentioned that he thought the top was going to be good at some point, just didn’t know when. After Sheppard moved him back to sixth, he adjusted quickly. There was another two-lap stint to get the race to lap 29 and once more Godown picked off two spots, moving into second behind Wight, with Bunting, Sheppard and Maresca rounding out the top five.

When the green flag flew once more, Wight took control of the race, but Godown worked the bottom to keep pace. Eventually, Godown moved back to the top and followed Wight’s line for a few laps before making his next challenge nearing 10 to go.

After it looked like Wight was pulling away, Godown clawed within a few car lengths with 12 to go. Thanks to a charge off the bottom, Godown led lap 39. A lap later, the first yellow due to a blown right-rear tire halted proceedings.

With 10 to go, Godown chose the bottom and Wight made the most of his attempt on the outside. The two ran an entire lap side by side with Godown eventually clearing Wight on lap 42.

“On those double-file restarts, he didn’t give me much room and I didn’t give him much room, but I don’t think we even touched,” Wight said on the home stretch of his battle with Godown. “That was good, hard racing for $25,000 and we showed these fans what Modified racing is all about.”

Godown fought off another double-file start with seven laps left and then a few single-file starts at the end to seal the victory. One of the more important restarts might have been one that didn’t count, though. With five to go, Friesen used the outside to get around Wight for second and then set his sights on Godown but a yellow negated the move. Friesen and Sheppard both eventually were forced to the pits with a shock issue and flat tire, respectively, inside the final five laps.

“I didn’t really have much tire to go at him,” Wight explained. “I tried to go for it on the restart, but then I just fell in line and made sure I finished.”

Wight followed Godown across the line in second, worth $12,500, ahead of Pauch Jr., who came from 19th on the starting grid and was firmly entrenched in battles with Friesen and Sheppard in the waning moments of the race. Pauch’s third-place finish cashes in $8,000.

“This one was a hard one, man,” Pauch said on the home stretch. “We battled out of our draw on Friday; we missed the redraw, but I knew we had a really good piece.

“It’s awesome to be up front here. There were a lot of times that the New York boys whooped us, but it’s about time the southern boys get on the podium,” Pauch said.

Horton, who started 22nd, used some late-race restarts and the top groove to his advantage to soar to the front in the late stages and snag a fourth-place result at Cherokee and $5,000 as Maresca rounded out the top five, worth $4,000.

Finishing sixth through 10th, respectively, were: Max McLaughlin from 20th in an under-the-radar performance; Ronnie Johnson, another deep starter from 29th; Darren Smith, who bounced back from multiple pit stops; Van Inwegen, who started in eighth but also was forced to the tail after being involved in a crash; and Mat Williamson, who secured a top-10 worth $1,750.

Sheppard, the 16th-place finisher, still earned $1,000 for his efforts as is customary for the ‘Elite Series’ standard purse.

Watt outdistanced a hard-charging Payton Talbot to etch his name in the series’ record books.

The Melvin L. Joseph Memorial at Georgetown Speedway in Georgetown, Del. is on deck for the Halmar International ‘Elite’ Series, scheduled for just two weeks, Thursday-Saturday, March 10-12. Once again, the field will battle for $25,000, $1,000 for 16th and $500 to start.