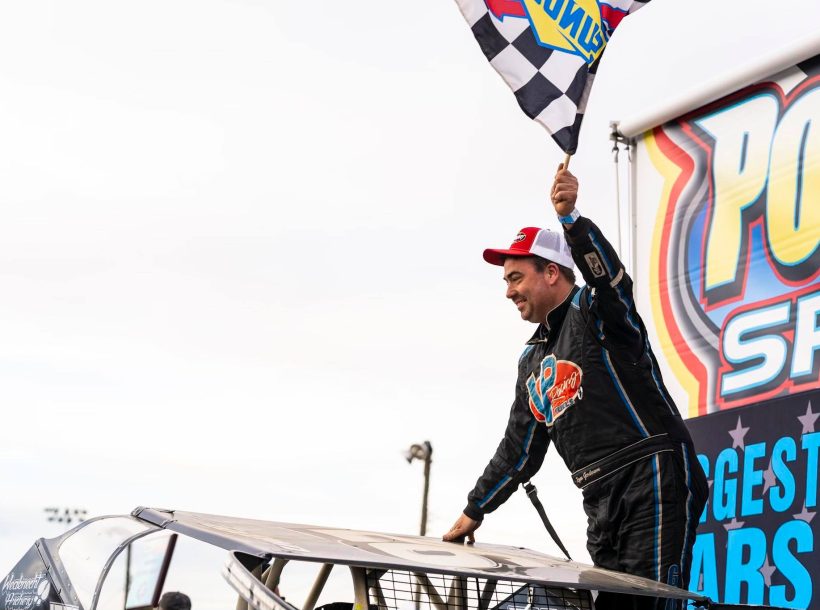 PORT ROYAL, PA – With a remarkable last-lap pass, Ryan Godown outdueled Mike Gular in an instant classic at the Port Royal Speedway to win the Speed Showcase 40 on Sunday, continuing Godown’s feverish start to the 2022 campaign.

After stalking Gular in the closing stages, Godown buried it in on the top of turns one and two for the last time and rocketed down the backstretch and into the lead as the field turned for home.

“I kept getting closer and closer to that wall; when I could get above the hole in one and two,” he said, “I could get a good run.

“I don’t know, maybe I just got enough confidence, and it got a heck of a run next to the fence on that last lap. I hate to see it for Mike, he ran a great race,” Godown said.

Gular, who led early and then fell back to third before roaring back to the lead, didn’t expect to see anyone going down the backstretch.

“He surprised the hell out of me, to be honest.” Gular said afterward. “I thought I ran a pretty good lap, too… he just got me.”

Gular drew the pole and led the 32-car field to the green at the palatial Port Royal Speedway, with Jimmy Horton, Jared Umbenhauer, Mike Mahaney and Stewart Friesen in tow.

Friesen dropped early, losing spots to Mat Williamson and Godown on the opening lap. That didn’t last long, though. On lap three, Friesen slid up to the fence between turns one and two, hit the curb and rocketed through the middle of Williamson and Godown down the backstretch before soaring around Umbenhauer for fourth in three and four.

Three laps later, Mahaney and Friesen both passed Horton for second and third, respectively, before Horton, aboard his Halmar International-sponsored No. 43, slowed to a stop for the race’s first caution on lap eight.

When racing resumed once more with 32 to go, Friesen drove by Mahaney for the runner-up spot with Godown lurking. Just one lap later, Friesen wasted no time driving around Gular for the lead while Godown made his way around Mahaney.

With Friesen, Gular and Godown out front, the battle for fourth between Mahaney, Williamson, Umbenhauer, Matt Sheppard and Mike Maresca was raging on with positions swapping on each circuit.

Just after Godown passed Gular for second on lap 14, Friesen slowed with a terminal issue on the front straightaway, ending his night and relinquishing the lead to Godown.

On the restart with 25 laps left, Godown led Gular, Mahaney, Williamson, Sheppard and Maresca as Umbenhauer was forced to the pits with a flat. Entering turn one, Gular threw a big slider on Godown, but the Ringoes, N.J., driver was able to cross the attempt and regain the lead with 16 laps complete.

Further back, while Maresca passed Mahaney for third, Matt Stangle, a provisional starter from 32nd spot, entered the top 10 after moving ahead of Dan Creeden and Danny Johnson.

Immediately after the restart, Godown had pulled away from Gular, but the pole-sitter started inching closer as the race neared the halfway point. By lap 24, Gular was there and unleashed another slider that Godown was able to cross. One lap later, Gular made it stick and regained control of the race.

Maneuvering through the middle of the track, Gular gapped Godown a bit before the two entered lapped traffic with 11 to go. Just as Godown readied for attack once more, the caution flag flew on lap 30, restacking the field and giving the leaders clean air once more.

After a slew of restarts, Gular still held the lead with five to go, utilizing the middle as Godown continued to bomb the outside.

“He (Gular) was better than us, I just couldn’t roll the middle like he could,” Godown commented. “He had the whole track, I just knew I needed to get above the hole on the last lap.”

As the top two barreled under the waving white flag, Gular peeled off into the middle and Godown sent it on the top. Off turn two, Godown inched by Gular and then dropped to the bottom in turns three and four to seal the win.

“The track was great, this is an awesome facility, and it’s a dream come true to win here at Port Royal,” Godown lauded.

“I was pretty good tonight,” he said on the homestretch. “The track was great, racy as always; all in all, it was a good run, my best run here. I love racing here and I can’t wait to come back in October.”

Gular really came to life when he moved off the bottom and into the middle after dropping to third.

“When you’re up front, I wasn’t sure where to go,” he said. “When those guys passed me, I knew I had to do something.”

Maresca rounded out the podium from the 12th starting spot.

“I’m really happy,” he said of his run. “I’ve had a lot of good runs here, but was never able to seal the deal. This is a great place to start the season here in the Northeast.

“They (Godown and Gular) had me covered tonight; we dug ourselves a hole in the heat and, because of that, I second guessed myself tonight, but that’s easy to fix on the notebook,” Maresca commented.

Williamson, a two-time winner at Port Royal, crossed the line in fourth, just ahead of Sheppard, who came from 11th starting spot.

Finishing sixth through 10th, respectively, were: Mahaney, the defending champion of the STSS Hurlock Auto & Speed Supply South Region; Anthony Perrego, who battled from the 13th spot; Danny Johnson, a constant in the top-10 throughout the 40-lap main event; B-Main qualifier Ryan Watt, who journeyed from all the way back in 25th; and provisional starter Stangle from 32nd.

Next on the Bob Hilbert Sportswear Short Track Super Series Fueled By Sunoco calendar is a stop at the Orange County Fair Speedway on Saturday, April 2 with $25,000 on the line for the winner. The event at the legendary ‘House of Power’ is the second race of the historic STSS Elite Series while also serving as the opener for the STSS North Region.