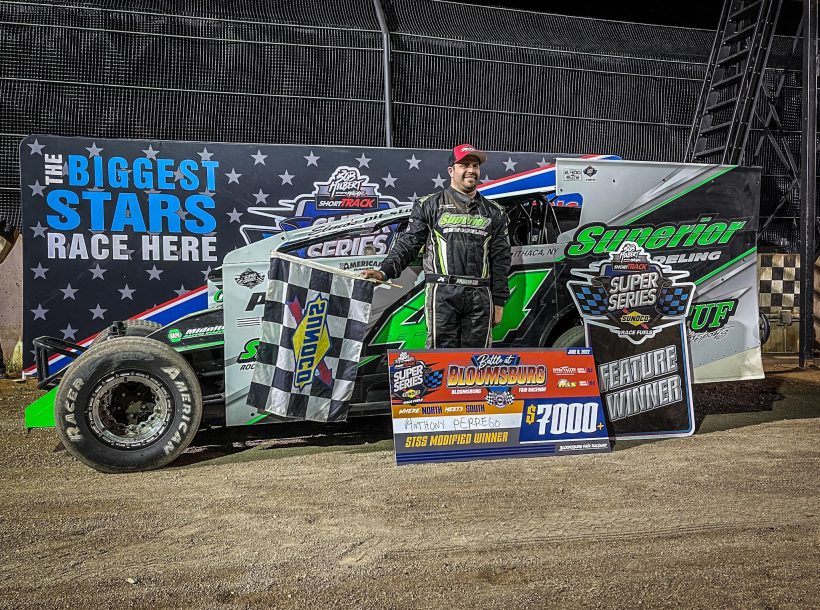 The ‘Battle at Bloomsburg’ triumph, which served as a combination race for the River Valley Builders North and Hurlock Auto & Speed Supply South Regions, was a $7,000 payday for Perrego and moves him just one win shy of Ryan Godown for third all-time on the STSS win list.

Godown himself had a quiet night before advancing to a runner-up finish late in the race. Bouc, who led for the first three laps and then again from lap 21-34, scored an impressive podium finish with his spec-head Small Block.

“Our car was really good tonight,” Middletown, N.Y.’s Perrego said in Victory Lane. “We were really good last year here, and it feels good to come back and do one spot better.”

The event was postponed to its Wednesday rain date after day-long rain moved over the area on Tuesday.

Bouc led from the jump, but as cautions began to halt progress, outside pole starter Matt Stangle used the top lane on a lap-three restart to snatch the lead. Once the field put laps on the board, Stangle pulled away and entered lapped traffic on lap 15. Bouc still trailed in second, ahead of Mat Williamson, Perrego and Billy Pauch Jr., who had just moved around Mike Gular for fifth.

As Stangle maneuvered through slower traffic with ease, Perrego and Pauch both moved by Williamson for third and fourth, respectively. With Stangle distancing himself from the field, a caution jammed everyone back up with 20 laps on the board.

On that ensuing restart, heartbreak struck for Stangle, who was unable to fire when the green flag flew. Behind him, Tanner Van Doren was collected, and Mat Williamson took the Behrent’s Performance Warehouse No. 3 to the pits with ignition issues.

With Stangle out of the race, Bouc resumed the lead and fought off Perrego on numerous restarts, ahead of Pauch, Gular, Alex Yankowski, Jeff Strunk, Godown and Mike Mahaney.

As the race entered the second half, Bouc still led but Godown, the South Region point leader, began his return to the front. Aboard his familiar black No. 26, Godown, who started seventh and dropped as far back as ninth, was on the move and up to fifth when Bouc crossed the line for lap 25. Shortly after, Matt Sheppard, who started 20th and then went to the rear with an early left front flat, joined the top 10.

Just as Bouc entered lapped traffic, the caution flew again, this time for a slowing Andy Bachetti with 27 on the board. After a few starts and restarts, one of which for a slowing Pauch Jr., who surrendered his third-place spot, Perrego threw a big slider entering turn one on Bouc for the lead. It stuck and the Brian Smith-owned No. 44 was in front for good.

Godown passed Bouc for second on the next restart on lap 35 as the two secured podium finishes. Meanwhile, on both restarts, Sheppard made massive gains, eventually finishing fourth.

“I just didn’t feel good from lap one,” Godown said in front of a crowded covered grandstand. “We just kept picking away and picking away trying to survive.

“Any time you get a top-three on the STSS, it’s a good night,” Godown mentioned.

After leading more than 15 laps, Bouc settled for third.

“We’ve been really working hard on this thing and have had really good runs lately,” Bouc said. “This is a hell of a motor, but the spec-head gets eaten alive on restarts, and we just had too many of them tonight.”

Bouc’s third-place effort netted him a $3,100 payday including bonuses.

Sheppard, who entered the evening in second in both the North and South Region standings, rallied for a tremendous fourth-place run, and Gular, despite racing with a left-front flat for long stretches of the race, rounded out the top five.

Finishing sixth through 10th, respectively, were Strunk, who battled inside the top 10 all night in the Dave Zubikowski No. 88z; Yankowski, another driver who spent the entirety of the 50 laps inside the top 10; Frank Cozze, who started 10th, dropped as far back as 12th and bounced back for eighth; Billy Osmun, who achieved his second career STSS top-10; and Williamson, who managed to come from the back to salvage 10th.

Third-generation driver Travis Green of Wallkill, N.Y., put his name on the STSS win list in the 25-lap STSS Crate 602 Sportsman event. The win was Green’s first with the series.

Did Not Start: Kevin Stevens