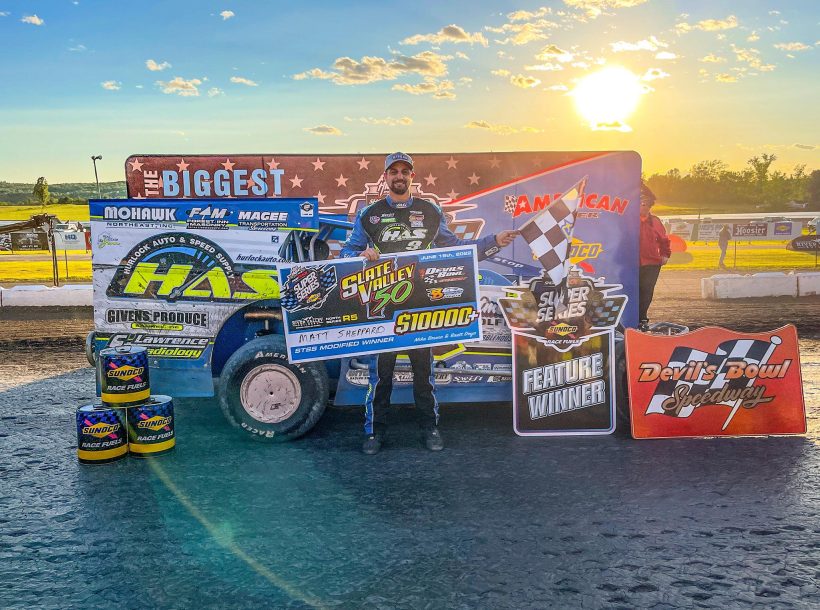 Devil’s Bowl Speedway became the 29th different facility visited by the STSS in 10 different states since the series was born in 2014. The event drew a capacity crowd to the West Haven, Vt., facility.

The ‘Slate Valley 50’ victory, which represented Round No. 5 of the River Valley Builders North Region, netted Sheppard a cool $10,350 for his Father’s Day efforts.

The historic win was the 26th of Sheppard’s STSS career, moving him to within eight victories of the all-time winningest total of 34 held by Stewart Friesen.

“We drew a good number, and we were good enough to stay there after 50 laps,” proclaimed Sheppard, who started from the pole position following the Beyea Custom Headers Redraw.

“I was struggling in traffic for a little bit, then it seemed like I caught a couple good laps on the bottom and was able to clear them guys,” explained Sheppard of his mid-race fight with lap traffic with the pack of chasers running him down for the lead.

Sheppard quickly darted out to a healthy lead, while Canadian Mat Williamson began to pressure McGrew Jr. for the runner-up spot as the field completed the seventh circuit.

Williamson threw a successful slide job at McGrew Jr. on lap 12 to take the runner-up spot away, with Anthony Perrego, Demetrios Drellos, and Erick Rudolph all in tow to battle for position inside the top five.

The Queensbury, N.Y., driver slid in front of Anthony Perrego on lap 14 to take the fourth spot away, and one trip around the speedway later, Drellos was by McGrew Jr. for the final podium position.

The top-three remained unchanged in position for the next six laps, but the distance between the three was shrinking with each passing lap.

Sheppard began to struggle to find racing room with Roger Henion Jr. and Danny Tyler racing side-by-side in front of him. With no lapped cars left between himself and Williamson and Drellos, Sheppard’s lead evaporated at a rapid pace.

Sheppard led at lap 25 – claiming the $200 Superior Remodeling halfway bonus – but his advantage was continuing to shrink with each passing lap, as Williamson continued to close to within three car-lengths and Drellos not far behind.

Sheppard’s saving grace came on the 30th circuit, as Drellos and Williamson started to seriously duel for the runner-up spot, slowing each other’s pace and allowing Sheppard to focus on the lap traffic scattered in front of him.

After struggling with the slower cars through the middle portion of the race, Sheppard’s car came to life on the bottom, suddenly putting distance between himself and the four-car battle for the second position.

With Sheppard shifting into cruise control out front, Williamson, Drellos, Perrego, and Rudolph put on a terrific show vying for the second position, worth $4,000 at the end of the 50-lap affair.

On lap 42, Williamson, Drellos, and Perrego fanned out three-wide off the second corner in their fight to come home second.

At the Sunoco checkered flags, Williamson, of St. Catharines, Ont., raced to the runner-up prize in his Behrent’s Performance Warehouse No. 3 car.

“Me and Demetrios had a heck of a battle going there at the end. If you take Matt (Sheppard) out of the race, you’d have a heck of a race (for the win),” explained Williamson of the fight for second.

“We’re just happy to get back to the podium after a few unlucky breaks,” Williamson continued.

“It pays to have some laps here when it slicks off like this… that was one of the most fun races I’ve been a part of,” an elated Drellos said of his battle with Williamson and others for the runner-up spot.

Montgomery, N.Y.’s Anthony Perrego, who was fresh off a win at Bloomsburg (Pa.) Fair Raceway with the STSS brought his Brian Smith-owned No. 44 home fourth, and Ransomville, N.Y.’s Rudolph settled for a fifth-place finish.

Finishing sixth through 10th, respectively, were Tim Fuller of Edwards, N.Y., piloting the St. Lawrence Radiology No. 19, who charged from the 12th position after drawing the worst number in the Beyea Custom Headers redraw; Jimmy Phelps of Baldwinsville, N.Y., in the HBR No. 98H, who finished exactly where he started; Mike Mahaney of Elizabethtown, N.Y., in the George Huttig-owned No. 35; Max McLaughlin of Mooresville, N.C., aboard the HBR No. 8H, good enough for the Five 55 Enterprises Hard Charger Award worth $300; and Stewart Friesen of Sprakers, N.Y., coming off a top five with the Camping World Truck Series on Saturday night.