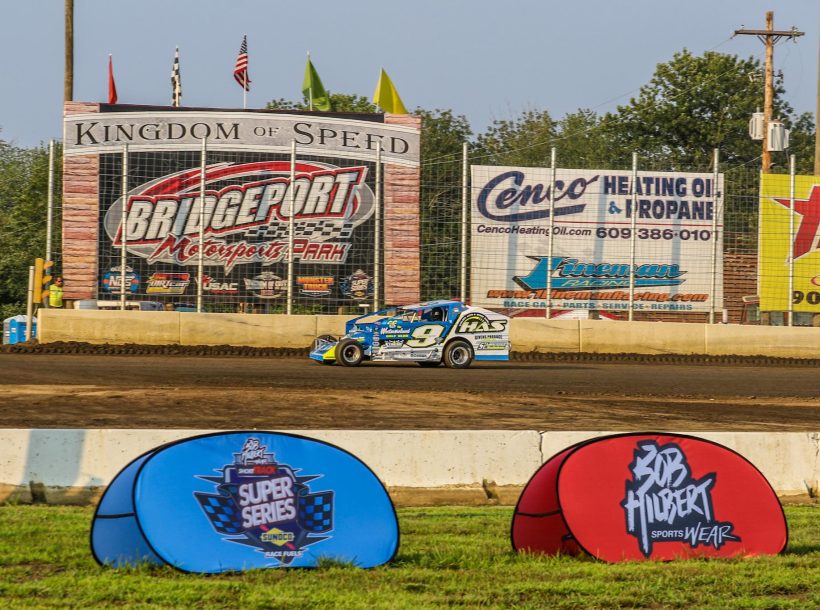 SWEDESBORO, NJ – Time for a Shootout.

The STSS visits the ‘Kingdom of Speed’ under its current configuration for the second year in a row for Round No. 5 of the Hurlock Auto & Speed Supply South Region $15,000 championship chase.

The STSS big-block/small-block Modifieds race for 50-laps around the high-banked four-tenths-mile oval in pursuit of a $5,000 top prize. A purse of more than $26,000 is on the line in the ‘South Jersey Shootout.’

Ringoes, N.J.’s Ryan Godown leads the South Region brigade by 15 markers heading into the track that he has dominated the last two seasons. Godown has already claimed eight victories this season at his Saturday night home in 2022 alone.

In six previous visits to Bridgeport with three different configurations, only Boyertown, Pa.’s Ryan Watt has claimed multiple victories after his triumph in last year’s non-stop edition of the ‘South Jersey Shootout.’

The ‘South Jersey Shootout’ is the last STSS race for a month’s time before firing back to life at Georgetown (Del.) Speedway on August 30 for the ‘Blast at the Beach.’

The ‘Ringoes Rocket,’ Ryan Godown, has been the man to beat at Bridgeport Motorsports Park over the last two seasons. As previously mentioned, the defending champion of the Speedway has already claimed eight victories this season and will look to use his home track advantage to extend his South Region point lead.

Frenchtown, N.J.’s Billy Pauch Jr. has gotten off to a slow start on the STSS South Region Tour. However, despite Godown’s numerous wins at Bridgeport, the ‘Kid’s Kid’ sits atop the Saturday night standings in his first full season competing at the high banks of Bridgeport. Pauch Jr. will look to turn his consistency into a $5,000 paycheck tonight.

Savannah, N.Y.’s Matt Sheppard has planted himself at the top of the STSS power rankings in 2022. The River Valley Builders North Region point leader leads all competitors with six STSS triumphs in 2022. Sheppard sits 15 points behind Godown in the South Region standings looking for his first career Bridgeport Motorsports Park victory.

Despite engine troubles and bad luck persisting Pipersville, Pa.’s Danny Bouc throughout the season, he remains fourth in South Region points. Bouc is familiar with the high banks of Bridgeport and will look for a little luck to claim his elusive first career STSS victory.

Neshanic Station, N.J.’s Matt Stangle has seen an uptick in recent performances with the STSS. After finishing runner-up at New Egypt (N.J.) Speedway, ‘Matty Ice’ led half of the ‘Battle at Bloomsburg’ at Bloomsburg (Pa.) Fair Raceway before mechanical issues ended his chance at his first career STSS triumph.

Despite not being a regular at the speedway, Lambertville, N.J.’s Cale Ross has shown speed in his handful of appearances at the South Jersey oval this season. Ross will look to find a little bit extra, joining the STSS stars at Bridgeport.

The STSS Crate 602 Sportsman battle for 25-laps in Round No. 3 of the Belmont’s Garage South Region. Tonight’s winner will take home a $1,500 payday for his efforts.

Bridgeport Motorsports Park is located at 83 Floodgate Rd in Swedesboro, NJ 08085. The official website is www.bridgeportmotorsportspark.com/ and can be reached by phone at 856.467.4407.