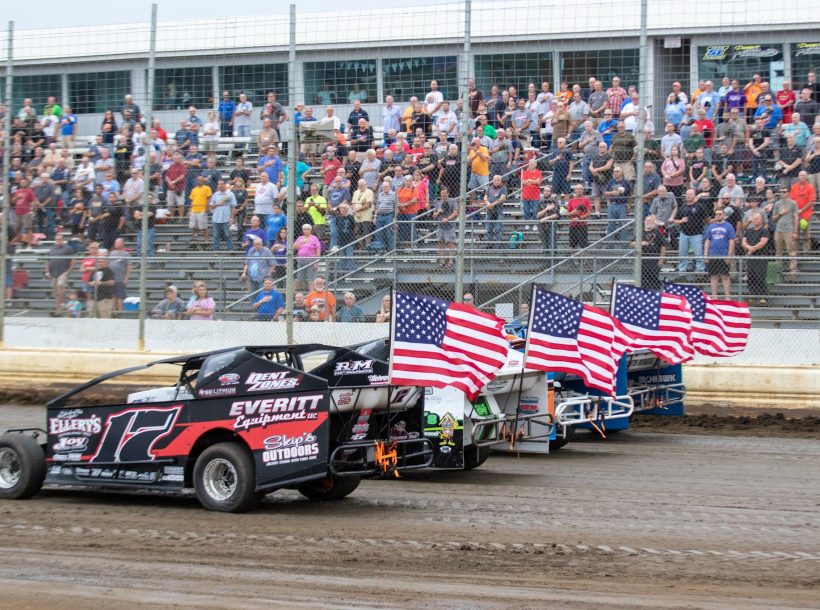 BRIDGEPORT, NJ – Last Tuesday night, Ryan Godown made another trip to his local ATM, cashing $5,000 for a record-tying fifth consecutive win at the Bridgeport Motorsports Park, and ninth at the New Jersey facility of the 2022 campaign.

The ‘Ringoes Rocket’ now has three wins under the Bob Hilbert Sportswear Short Track Super Series (STSS) Fueled By Sunoco sanction this season, pairing his win at Bridgeport with a last-lap triumph at Port Royal Speedway and the historic opener for the Halmar International ‘Elite’ Series at South Carolina’s Cherokee Speedway for $25,000.

Go, Go, Godown
*Godown now has 11 career victories under the STSS banner, third-most all-time. Remarkably, his 11 wins have come at 10 different tracks; the only duplicate is I-88 in Afton, N.Y., with both wins coming in 2016.

*Godown increased his advantage in the Hurlock Auto & Speed Supply South Region championship hunt, edging out to a 25-point lead over Matt Sheppard with four races remaining. In five races, Godown has amassed $17,856 for his efforts.

Locals Own ‘Kingdom of Speed’
*Bridgeport regulars swarmed the top five, making up spots Nos. 1, 2 and 4. Ryan Krachun enjoyed the best STSS race of his career, advancing from ninth to finish second, passing Matt Sheppard with less than 20 laps to go before battling for the win in the waning moments.

*Ryan Watt, a three-time Series champion, was forced to come through the consolation, but sliced through to a fourth-place finish from the 18th starting spot.

Super Matt Scores Another Podium
*Matt Sheppard drove from 11th to third and landed on the podium yet again. In 12 STSS races this season, Sheppard has finished inside the top five on 10 occasions. Sheppard has earned $12,750 in the five South Region races.

*As mentioned, Sheppard is still in striking distance for the South Region championship, sitting second and just 25 points out of Godown, a title worth $15,000.

*Danny Bouc started on the outside of the front row, dropped back a few spots, then moved back to the front and continued a yo-yo-style evening before settling for a solid fifth-place finish, his third top-five in the five STSS South Region races. In five races, Bouc has earned $7,650 for his performances.

*Gular fought from behind all night and eventually salvaged a seventh-place finish from 21st and firmly sits fourth in points, just six tallies behind Bouc. Gular has earned $7,231 in five South Region races this season.

*Mahaney entered the night fifth in points and ended there but lost some ground after a DNF. Mahaney was credited with 23rd at the end of a night that looked promising after redrawing No. 3 for the 50-lap feature.

*Watson started fourth and followed Godown into the runner-up spot early in the race, even challenging the No. 26 before suffering a right-rear flat and exiting the racing surface.

*Stangle started way back in 23rd and was on the march toward the front. On lap 35, Stangle was into the top five, running in fourth when he slowed to a spot with a night-ending ailment. He entered the night in seventh in points and stayed there, but obviously suffered a major hit to his hopes of entering the top five.

The Hurlock Auto Speed & Supply South Region returns to action in the First State of Delaware on Tuesday, August 30 for Georgetown Speedway’s ‘Blast at the Beach.’ For just 35 laps, the winner will pocket $6,000. The STSS Crate 602 Sportsman will be in action for a $1,500 top prize.