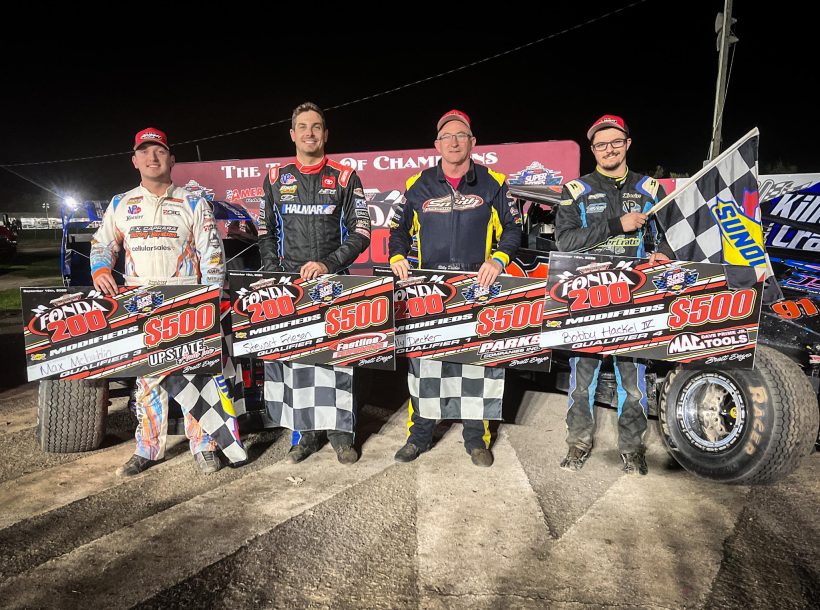 FONDA, NY – Qualifying Night for the ‘Fonda 200’ presented by Southside Beverage is in the books.

Billy Decker, Stewart Friesen, Max McLaughlin, and Bobby Hackel IV claimed the four qualifying races and the $500 to go with for their victories to begin their quest of Round No. 4 of the Halmar International ‘Elite’ Series and Round No. 9 of the River Valley Builders North Region.

Billy Decker rolled off from the fifth starting position in Qualifier No. 1 presented by Parks Companies. The Unadilla, N.Y., native raced by Ballston Spa, N.Y.’s Jack Lehner at the midway point of the 15-lap qualifier and never looked back.

“We didn’t come here to get our haircut, we came here to win the race,” explained Decker in Victory Lane.

Ringoes, N.J.’s Ryan Godown and Lehner rounded out the podium, locking themselves into the redraw for the 200-lap main event.

Sprakers, N.Y.’s Stewart Friesen was dominant in the second qualifier, racing off the outside of the front row to take the lead and never looked back.

Friesen picked up his $500 courtesy of Fastline Performance in Qualifier No. 2.

“Proud of our Halmar team, we’ve got a fast hot rod and I’m really looking forward to tomorrow,” proclaimed Friesen in Victory Lane.

Qualifier No. 3, presented by Upstate Auto, saw Mooresville, N.C.’s Max McLaughlin follow in Friesen’s footsteps. McLaughlin started on the pole and ran away with a dominant victory in the third of the four qualifying events.

“This isn’t one of my better tracks, but it’s sure been a lot better so far this weekend,” McLaughlin stated in Victory Lane.

Despite starting on the front row, Hackel IV was not as dominant as Friesen and McLaughlin were. Despite challenges from Dave Constantino and Mike Mahaney however, Hackel never wavered.

Qualifier No. 4 was presented by Dave Prime Jr. MAC Tools.

Elizabeth, N.Y.’s Mike Mahaney was the runner-up and Queensbury, N.Y.’s Demetrios Drellos raced from 11th to round out the redraw cars.

The STSS Crate 602 Sportsman will also be on hand for a full program in Round No. 6 of the Precision Hydraulic & Oil North Region.