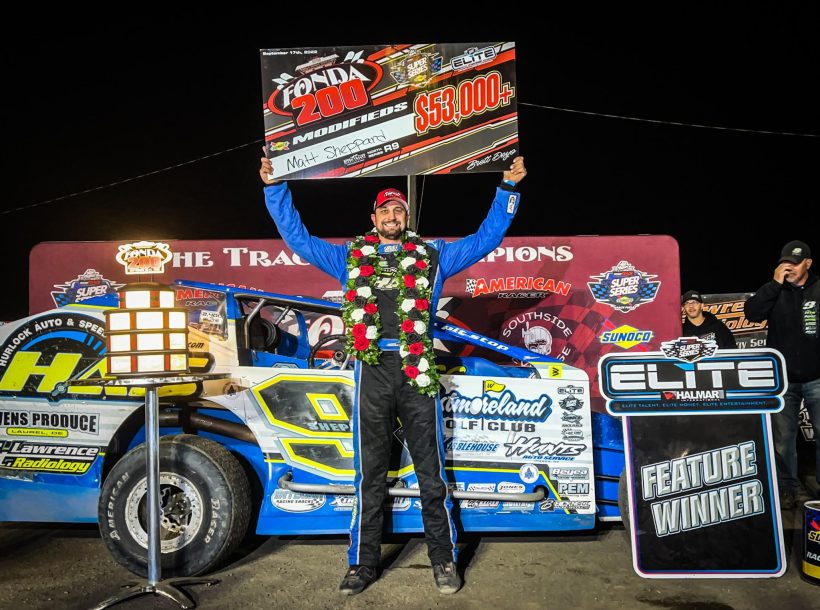 FONDA, NY – Second to none.

For the first time in his career, Matt Sheppard was victorious in the historic ‘Fonda 200’ presented by Southside Beverage.

“We worked on the car all weekend trying to make it better,” explained an emotional Sheppard in Fonda Speedway Checkered Square. “We took one last stab at it at the halfway break, and we finally got it right.”

The ‘Fonda 200’ was the final ‘crown jewel’ event missing on Sheppard’s resume before conquering the 2022 edition.

“I can’t wait to see my name on that trophy,” said Sheppard of the ‘Fonda 200’ trophy with past winners on it.

Friesen led in the early going, but the driver on the move and staking his claim in the opening 100 laps was Elizabethtown, N.Y.’s Mike Mahaney.

Mahaney raced to third in the opening lap, four laps later Mahaney was by Hackel and into the runner-up spot.

After getting to second and chasing Friesen for several laps through lap traffic, Mahaney used the inside groove to drive by Friesen and take the lead at the completion of lap 29.

Mahaney settled in at the front of the field, while Middletown, N.Y.’s Anthony Perrego began to march to the front.

After starting slow, Perrego joined Mahaney and Friesen at the front of the field. The lead trio began swapping lanes and positions all while dicing through traffic.

Eventually, things settled down around lap 50 and Mahaney was leading Perrego and Friesen at the front of the field.

Things began to shake up at lap 66 when the yellow flag came out, and Ringoes, N.J.’s Ryan Godown, who was running in the top 10, went to the pits.

Over the next 25 laps, multiple drivers began to pit during yellow flags, attempting to cycle their way back forward at the lap 100 break.

A lap 86-yellow saw Mahaney go to the hot pit moving Perrego to the lead and Sheppard had quietly found his way to the runner-up position.

Perrego would lead the remaining 10 laps in the first 100, claiming the $200 halfway bonus courtesy of Superior Remodeling.

Unadilla, N.Y.’s Billy Decker cycled his way to the lead, alongside Sprakers, N.Y.’s Jessica Friesen at the start of the second 100 laps.

Sheppard began the second half from the 13th starting position, before quickly flexing his muscle from the changes made after the halfway break.

With Sheppard on the move, Guilderland, N.Y.’s Marc Johnson was the man pacing the field after sliding by both Decker and Friesen for the top spot.

Sheppard was up to sixth by lap 106, before cracking the top five just two laps later. Sheppard took the runner-up spot on lap 119, while Johnson was out in front by a healthy margin.

Meanwhile, Sheppard wasn’t the only car on the move, as Stewart Friesen had come back to life after restarting in 16th at the halfway point.

Friesen was into fifth on lap 119 before closing in on Mahaney and Decker for the third position.

Mahaney and Friesen both cleared Decker in the next three laps, setting up a battle between the pair for third.

After battling side-by-side with Friesen for several laps, Mahaney eventually shook off Friesen and drove away with the final podium spot.

The yellow flag came out on lap 131, giving the leaders clear racetrack and putting Sheppard alongside Johnson for good.

Sheppard would take advantage of the restart, driving around Johnson and taking the lead away for the first time in the event.

Perrego and Mahaney became the pair to watch in the remaining 65 laps, after Friesen’s night ended early due to a mechanical failure.

They both cleared Marc Johnson by lap 157 to occupy second and third and locking in on Sheppard who was out in front.

Perrego came to life in the last 30-laps of the event. Perrego slid underneath Mahaney for the runner-up spot on lap 180, giving him 20 laps to try to run down Sheppard.

The race’s final caution fell on lap 190. With only 10 laps remaining, a single-file restart gave Perrego his final opportunity at Sheppard.

Perrego got close, including getting to Sheppard’s back bumper with four laps to go, but never could make the move.

Sheppard was triumphant, claiming the race representing Round No. 4 of the Halmar International ‘Elite’ Series and Round No. 9 of the River Valley Builders North Region.

The win makes Sheppard the point leader in both the ‘Elite’ Series and the North Region.

“He made that one mistake in turn one and we got to him, but I was just too tight in turn three,” explained Perrego of his last-ditch effort for the top spot.

Mahaney rounded out the podium finishers.

“I felt like we were better in the first 100 but the track changed… it happens, and we’ll try again next year,” proclaimed a dejected Mahaney after taking his third consecutive third place finish in the ‘Fonda 200.’

Fonda, N.Y.’s Danny Varin raced to a quiet-but-productive fourth-place finish in the Ed Monger owned No. 93 and Johnson rounded out the top five in his S&S Asphalt Paving No. 9.

Finishing sixth through 10th, respectively, were Billy Decker, who battled an ill handling racecar and multiple trips to the pit area in the second 100; Sheffield, Mass., native Andy Bachetti came home seventh in the Garrity Asphalt Reclaiming No. 4; Jessica Friesen aboard her One Zee Tees No. 1z; Max McLaughlin in his HBR Racing No. 8H, and Altamont, N.Y.’s Brian Gleason rounded out the top 10 in his KJG Motorsports No. 3G.

Clark used a late-race restart to wrestle the top spot away from Troy Zilles to take the win.

Up next for the STSS is the ‘Short Track SuperNationals’ weekend at N.Y.’s Afton Motorsports Park on October 7-8. A full weekend of racing including match races for both the Crate 602 Sportsman and Modifieds takes place, leading to the 14th running of the ‘Working Man’s Race’ on Saturday, Oct. 8. The STSS Modifieds go for 50-laps and a $5,500 top prize in a non-points event for STSS competitors.