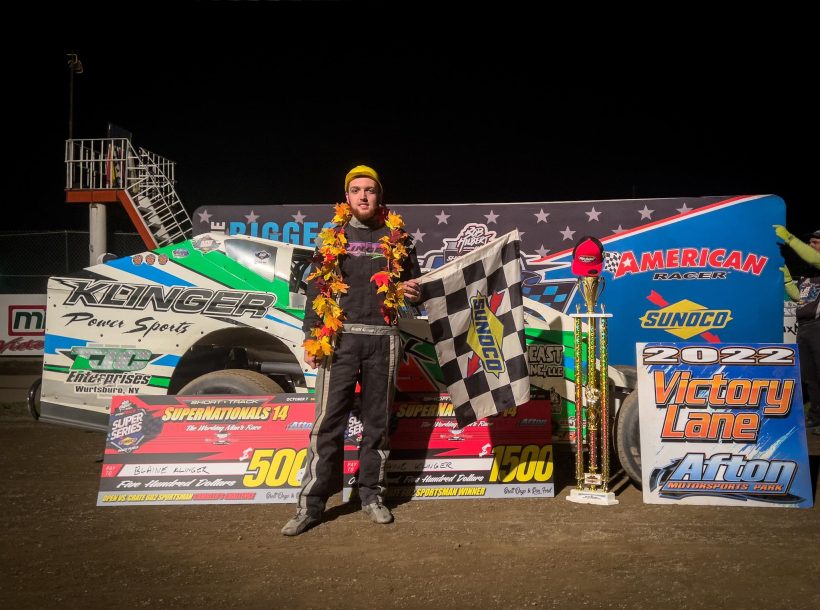 Klinger led all 30-laps of the Open vs. Crate 602 Sportsman Sportsman Challenge to pick up the $2,000 payday after posting the $20 Gambler’s Fee.

With 128 race cars packing the Afton Motorsports Park pit area for Night No. 1 of the Short Track SuperNationals Klinger topped them all.

The Walton, N.Y., native also swept the American Racer Cup One-on-One Match Races – besting seven of the other competitors – to claim that $1,000 prize.

“This is unbelievable. All we’ve wanted to do is get one of those big checks, and now we got three in the same night,” Klinger explained following his impressive effort on the Afton Fairgrounds.

In total, Klinger added $3,050 to his bank account to kick off the “Working Man’s Race” weekend.

Klinger fired from the pole of the 30-lap Sportsman main, and despite several restarts and challenges, was up to the task each and every time.

Two New Jersey drivers were on the move at the drop of the green flag, as David Burns and Steve Davis had each quickly advanced into the final two podium positions.

Davis’s charge wasn’t done however, as he passed his fellow Garden State racer on lap seven and set his sights on Klinger up front.

After a lap-nine yellow, Davis restarted next to Klinger on the front row but couldn’t unseat the leader.

Lake Ariel, Pa., resident Tyler Peet forged an impressive charge during the race’s mid portion. Peet came from the 13th starting position and had made his way up to sixth before the yellow came out again on lap 17.

The final 13 laps spun off uninterrupted and Klinger pulled away from Davis to claim the win and cap a dream night.

Norwich, N.Y.’s Alan Barker (14.570 seconds) and Kauneonga Lake, N.Y.’s Justin Holland (14.745) set the quickest time in each of the timed sessions, locking themselves into the Saturday redraw.

Dalton Herrick was victorious in dramatic fashion in the final CRSA 305 Sprint Car finish of the season. Herrick used a last lap pass on the final lap of the 30-lap main to take the lead, the win, and the series championship.

Herrick caught leader Kyle Pierce in lap traffic and Mike Kiser closed in the pair with five laps to go, but the yellow flag came out before the trio could dice it up in lap traffic.

The race was reset with Pierce facing pressure from the duo behind him. Pierce protected the bottom and Kiser was unable to find a way by.

Herrick found the top to his liking in turns one and two, rolling around Kiser with three laps to go, and completing the pass for the win on the final lap.

Pierce held on for second, Kiser third, and Tomy Moreau and Chad Miller rounded out the top five.

Jaden Wust won the Slingshot feature with a pass on a late-race restart in the 15-lap feature. Chase Schott and Mason Pittenger rounded out the top three.

The Short Track SuperNationals weekend concludes tomorrow night at Afton Motorsports Park. The STSS Modifieds battle for 50-laps and a $5,500 top prize in the 14th annual ‘Working Man’s Race’ – a non-points event for the STSS Modifieds.

Afton Motorsports Park is located at 46 East Main Street Afton, NY 13730 and can be found on the web at www.aftonmotorsportspark.com or contacted by phone at 607.624.3772.

Did Not Start: Aaron Clark