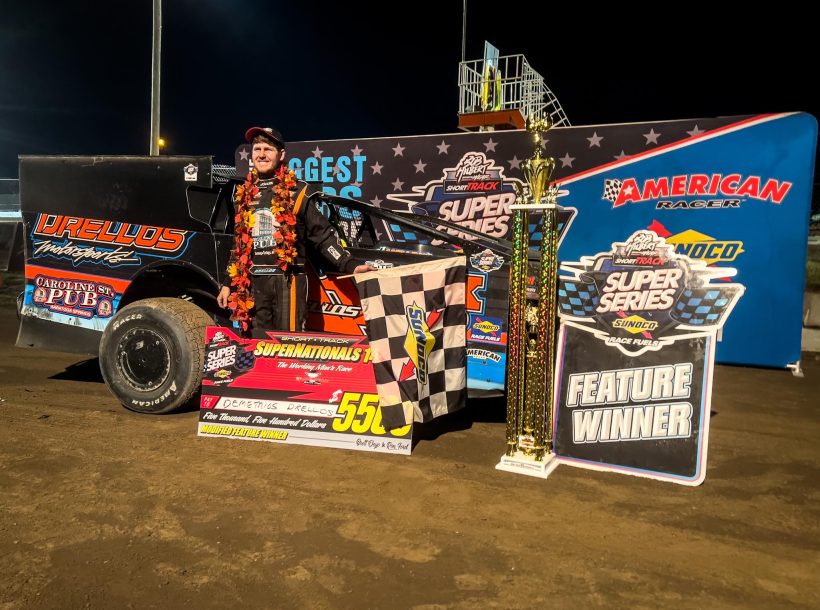 One hundred and forty-five racecars across the three divisions packed the pit area of the Chenango County facility, with Drellos walking away with the top honors.

The event – a non-points race for series competition – netted Drellos $5,500-plus for his efforts and his first ever STSS victory.

The Queensbury, N.Y., resident outdueled fellow Fonda (N.Y.) Speedway regular Craig Hanson in a mid-race tussle for the lead to drive away with the race designed to support the weekend warriors of the sport.

“It’s awesome,” Drellos said of his first career STSS win. “It couldn’t happen in a better race; the ‘Working Man’s Race’… we do this for fun and it’s a very fitting race (to win).”

Hackel jumped out to the lead at the drop of the green flag. Multiple yellows occurred before the field could complete the second lap, including a large pileup in turn three.

Once the field cleared the lap one hurdle, Drellos went to work.

Drellos cleared Meade for the runner-up spot and set his sights on Hackel for the top spot.

With Hackel running the bottom groove, Drellos rolled the top groove of the Afton Fairgrounds oval to drive around Hackel and take the top spot.

Just behind the lead duo, Hanson – the 2013 winner of the Short Track SuperNationals – was on the move toward the lead duo from his sixth starting position.

Hanson drove around Danny Creeden on lap five, then cleared Meade at the completion of the sixth lap to set his eyes on the pair up front.

A lap-seven yellow brought the field together and put Hanson on the bumper of the leader Drellos. Hanson would pounce on the opportunity, diving underneath Hackel for the runner-up spot.

Drellos pulled away from Hanson on the ensuing green flag run, until the leader reached lap traffic on lap 14. Hanson reeled Drellos in quickly to set up the heavyweight bout between the pair of Fonda Speedway drivers.

Hanson cleared Drellos in lap traffic on lap 19, just before another yellow came out to reset the field. Hanson and Drellos would again pull away and battle for the top spot amongst themselves.

The pair raced side-by-side for several laps battling for the lead. Hanson led at the halfway mark.

Drellos finally used the inside groove to clear Hanson for the lead at the completion of the 29th circuit.

The race would fall under red flag conditions on lap 31 after the lights went out on the speedway. Fortunately, no incidents occurred while the field slowed to a halt after the outage.

When resumed, Drellos picked up where he left off, leading the remaining 19 laps for his first career STSS win.

Hackel slid by Hanson for the runner-up spot in the late stages.

“We finally got our first STSS podium… there was a really good group of cars and we’re happy to be here,” Hackel proclaimed of his best career STSS finish.

Hanson rounded out the podium after his bid to become the first repeat winner of the Short Track SuperNationals.

“We had a good battle going, I just started to get a little loose and should’ve moved to the bottom, but I felt more comfortable on the top,” explained Hanson of his battle with Drellos.

Finishing sixth through 10th, respectively, were East Greenbush, N.Y.’s David Schilling, who was the Upstate Automotive Hard Charger Award winner after coming from the 18th starting position; Kauneonga Lake, N.Y.’s Justin Holland, who was the highest finishing Afton Motorsports Park regular; Norwich, N.Y.’s Alan Barker, who was as high as fourth before falling back on a late race restart; Frenchtown, N.J.’s Billy Pauch Jr. aboard his Kid Racing No. 15; and Matt Meade.

Craig Hanson came up short in the 50-lap ‘Working Man’s Race,’ but was triumphant in the American Racer Cup One-on-One Match Races.

After Billy Pauch Jr. outgunned Nick Nye in the opening match, Pauch Jr. selected Hanson as his next opponent. Hanson would take it from there.

“I learned you just gotta drive it a little harder than I did in the heat, and it worked out… it’s a great start to the night,” smiled Hanson in Victory Lane.

Kreg Crooker claimed his third career STSS Crate 602 Sportsman victory, leading all 25-laps of the affair for the $1,500 paycheck.

The fourth-place finish was enough to crown Steve Davis as the Precision Hydraulic & Oil North Region champion for the first time in his career.

Up next for the STSS is the ‘Speed Showcase’ Weekend at Pa.’s pristine Port Royal Speedway on Thurs.-Sat. Oct. 13-15. The three day weekend consists of Round No.’s 7 & 8 of the Hurlock Auto & Speed Supply South Region for the STSS Modifieds along with Saturday’s headline event, the 75-lap, $50,000-to-win ‘Speed Showcase 75,’ which also serves as Round No. 5 of the Halmar International ‘Elite’ Series. The STSS Crate 602 Sportsman join the weekend for Round No. 5 of the Belmont’s Garage South Region. The STSS Crate 602 Sportsman battle for a $4,000 winner’s share in the Ice Less LLC. ‘Speed Showcase 50.’ The 410 Sprint Cars of Port Royal Speedway and the New York Based Pro Stocks are also on tap for the weekend of racing.

Afton Motorsports Park is located at 46 East Main Street Afton, NY 13730 and can be found on the web at www.aftonmotorsportspark.com or contacted by phone at 607.624.3772.