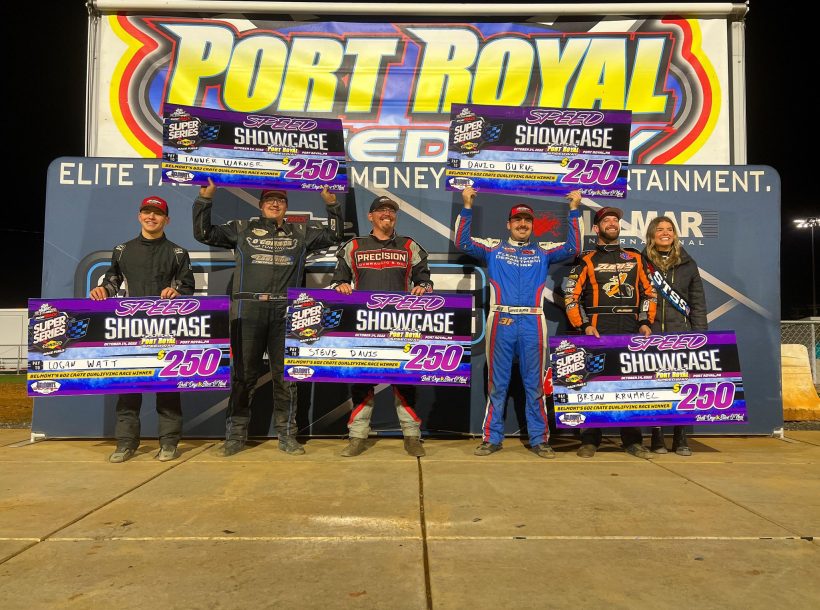 Brian Krummel blistered the middle-high groove nearly .4 seconds faster than anyone else in his qualifier and picked up the win with apparent ease.

“We were pretty quick in the morning and the track changes so much you never really know what you’re gonna have,” Krummel said. “You try to adjust to it and we hit it right on the head for the heat.”

Port Royal Speedway’s track crew performed an extensive re-grooming of the surface between the morning practice sessions and the beginning of qualifying, after two inches of rain Thursday washed out practice and a preliminary modified feature.

Cooler temperatures during the evening tailed a 65-degree day, resulting in a great increase in grip through the night’s racing compared to those morning practices.

In the second qualifier it was “The Spark Plug,” Logan Watt picking up the win after a spirited battle with eventual runner-up Thomas Sherby, which saw Watt use both high and low lanes.

“Track’s not going to be quite the same tomorrow, but it’s going to be pretty close. To figure out both top and bottom lanes is going to be really important, because the setup has got to be right tomorrow,” Watt said.

The third qualifier looked similar, with David Burns getting reps on both the cushion and the rail to defeat Carter Crooker and score the win. Burns, who began the year in the Modified ranks at New Egypt Speedway struggling and returned to the crate division with the help of his car owner, Marty Resnick.

“The car has been so good all year, we just keep finishing second…To come here, 77 cars and run really good and win this thing, it feels good,” Burns said.

“We struggled, had a distributor issue earlier in the timed practice,” Davis said. “Howie (Finch) made some calls from home watching on Flo and they were right, because the car is really good right now.”

Finally, in the fifth qualifier it was another hired driver, Tanner Warner going to victory lane in EJ Gallup’s usual mount for the limited sportsman division at Utica-Rome.

“E.J. is the head coach of the basketball team back home for the college, he’s so backed up,” Warner said. “To come out here and compete with these guys is awesome, I want to thank EJ and everyone for the opportunity.”

Each of the qualifying winners received $250 courtesy of Andy Belmont and Belmont’s Garage.

For the Oct. 15 event, reserved Grandstand Admission is $40 (all seats).

Saturday Reserved Seating (sections A-G) are on sale through the Port Royal Speedway office at 717.527.2303.

The entire weekend will be broadcast live on FloRacing (www.floracing.tv) as part of the annual subscription.