Race of the Year: Sheppard Completes Last-Lap Pass of Friesen at Port Royal 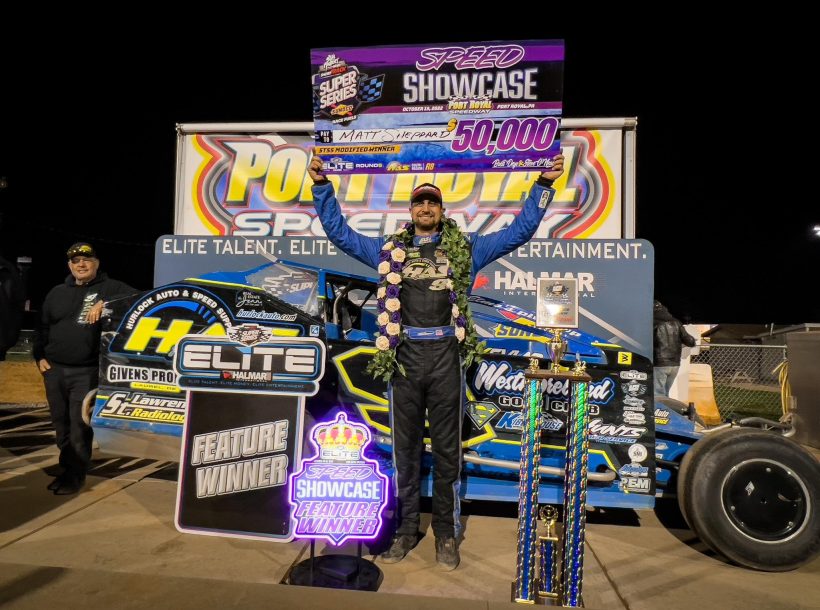 In unbelievable fashion, Matt Sheppard raced from a flat right rear-tire to win the third running of the ‘Speed Showcase,’ worth $50,000-plus.

The win was Sheppard’s ninth Bob Hilbert Sportswear Short Track Super Series (STSS) Fueled By Sunoco victory of the 2022 season and his second consecutive $50,000-plus victory with the STSS.

The Savannah, N.Y., resident passed Stewart Friesen with less than two laps to go to win the newest addition to the crown jewels of Modified racing.

“I was really struggling in traffic (after getting a flat tire), and I wasn’t sure we even had a top-10 race car,” explained an elated Sheppard in Victory Lane.

“Once I got into some clean racetrack this thing took off… what a wild last lap. I hope nobody left early.”

With Sheppard coming from the 11th starting position, Jimmy Phelps and Mike Mahaney occupied the front row for the 75-lap affair.

Phelps quickly raced to an impressive lead in the early going, while Mahaney settled into second.

Racing picked up for the final podium position with multiple drivers vying for third. Larry Wight, Anthony Perrego, and Ryan Godown were trading places in the early going.

Multiple yellows flew throughout the early portion of the race with drivers attempting to adjust their racecars for the long run over the course of 75 laps.

Despite the yellows, Sprakers, N.Y.’s Stewart Friesen was quickly working his way through the field, ascending into the top five at a rapid rate from his 24th starting position.

Meanwhile, Sheppard was mired in a battle with St. Catherines, Ontario, Canada’s Mat Williamson for the ninth position. Sheppard gained momentum from the outside of the second turn, when Williamson came off the bottom of the corner.

The pair got together, and Sheppard impacted the outside wall. Two laps later Sheppard came up lame with a right rear flat tire.

Sheppard would restart from the rear while Friesen’s attack on the field continued. Friesen would eventually run-down Phelps, who was the dominant car in the early going, and take away the lead.

Friesen set a torrid pace from that point, appearing to be well on his way to the $50,000 payday. The second half of the race was plagued with more yellows as cars began to fall victim to worn tires.

Multiple drivers made their way to the pit area to change tires, make shock adjustments, and some to add fuel to their racecars.

At lap 60, Sheppard’s charge from the back was quickly becoming apparent, as the Hurlock Auto & Speed No. 9s was into the top-10.

The more yellows that flew, the more Sheppard was able to pick his way forward. Sheppard would restart on the outside of the second row with 10 laps to go.

Sheppard used the opportunity to move into the runner-up position before another yellow flag fell on lap 69, with just six laps remaining.

The yellow setup a battle for the ages between the two titans in Modified racing. Sheppard, one of the hottest drivers in the country, and Friesen, the dominant car for much of the 75-lap race.

Friesen raced off the bottom groove on the restart to take the advantage, leaving Sheppard to chase.

Sheppard ran the extreme outside of turns one and two trying to run down Friesen, while the Halmar International hugged the bottom of the half-mile speedway.

When STSS starter Joe Kriss flashed the two-to-go sign, Sheppard made his move. ‘Super Matt’ built up the momentum to pull up alongside Friesen for the lead down the back straightaway.

Sheppard cleared Friesen off the fourth turn and led the final two laps, his only two of the race, to claim the $50,000 top prize.

Friesen, of Sprakers, N.Y., would settle for second.

“We just ran out of tires at the end,” said a dejected Friesen following the race. “It’s a privilege to be here at Port Royal though and hopefully we get to try again next year.”

Jimmy Phelps would settle for the final podium position in the HBR No. 98H.

“We had a great car but obviously those guys were a little better when it counted… my guys gave me great car and I thought for a little while we had a race winning car,” explained a content Phelps of his podium run.

Middletown, N.Y.’s Anthony Perrego came home fourth in the Brian Smith-owned No. 44 and Covington Township, Pa.’s Alex Yankowski rounded out the top five in his family-owned No. 84y.

Finishing sixth through 10th, respectively, were Ringoes, N.J.’s Ryan Godown who ran in the top ten throughout the 75-lap race; Neshanic Station, N.J.’s Matt Stangle, who followed up last year’s podium finish with a top-10; Middlesex, N.Y.’s Alan Johnson snuck into eighth in the Mark Spoor Racing No. 14j; Wallkill, N.Y.’s Tyler Dippel, who grabbed a top-10 in his third race of 2022; and Mat Williamson rounded out the top-10 in the Behrent’s Performance Warehouse No. 3.

The STSS River Valley Builders North Region hosts its championship round on Friday (Oct. 21) at Orange County Fair Speedway in Middletown, N.Y., with the ‘Hard Clay Finale’ paying $10,000 to win.