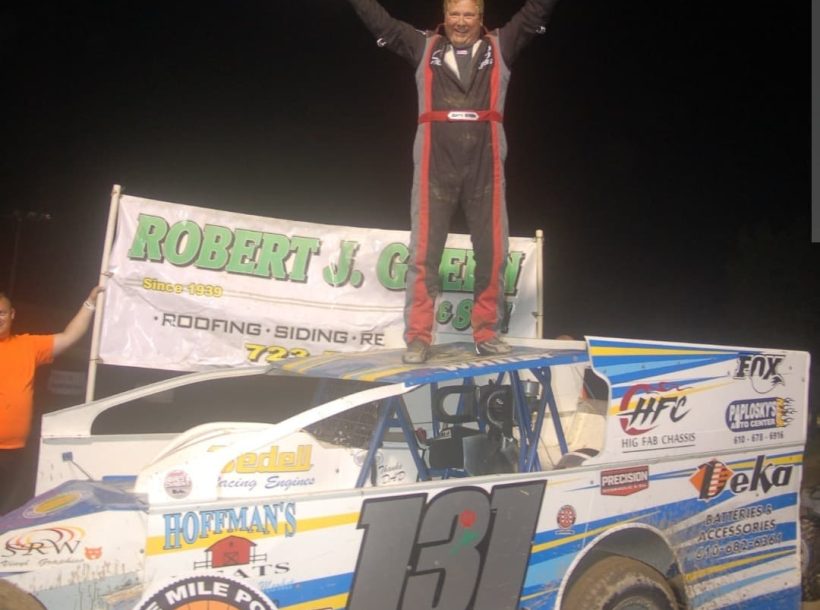 GREENWOOD, LA – Long before Mertztown, Pa.’s Barry White towed his racecar south for the 2022 Ollie’s Bargain Outlet Cajun Swing presented by Wegner Automotive, he was a 19-year-old kid at the old Reading Fairgrounds.

His debut in racing came there in 1977. He paid $25 for the car, had a set of wrenches, two screwdrivers and a hammer. No trailer, they flat-towed his Pontiac Grand Prix racecar 15 miles behind his daily driver – a 1970 Chevy Nova.

“The promoters at Reading decided they were going to start a class called Olympic stocks,” White said. “Basically, what it was, you knock the windows out of a car and put a rollbar in it.”

Now 65-years-old, White still remembers his first trip to Reading as a kid with a friend. Al Tasnady won the Modified feature and was hanging out in a bar outside turn four when Barry met him and wanted his autograph. Tasnady procured a pen, but the then eight-year-old kid had nothing for the legend to sign.

“I walked around with Al Tasnady’s signature on my forearm for two weeks, I wouldn’t wash it off…Kids had baseball players and football players as heroes. My heroes were racecar drivers,” he said.

Joining Tasnady in White’s pantheon of heroes were the likes of Buzzie Reutimann, Freddy Adam and Jackie Evans among others. White’s first number in racing was No. 77, just like Evans.

Less than two years after his debut, racing ceased at the fairgrounds. Barry White was left without a division to race and a track to call home.

“We ran Late Models at Linda’s, Big Diamond, a little bit of Grandview. I went to Susquehanna with the Late Model once and fell in love with that place,” he said.

Before long Barry left the Late Model class and set his sights on the Modified ranks, foregoing the purchase of a new Late Model and borrowing $5,000 from the bank to bring home a used Tobias Chassis in 1986. He installed the small, 283 cubic-inch engine from his Late Model and raced all around the Keystone State, from Port Royal and Susquehanna to Grandview and Big Diamond.

When it was announced that Modifieds would become a weekly class at Susquehanna, White declared it his new home. While his father questioned the decision, Barry only needed one reason for it, recalling his affinity for the place he developed while still running the Late Model.

“Because that’s where we’re gonna win.”

And he was right. In 1994, 18 years into his racing career, Barry White won a feature for the first time, right there at Susquehanna.

Starting outside the front row, he held off a star-studded field of challengers that included hard-charging Meme DeSantis, Jeff Strunk, and Kenny Brightbill.

“Meme was all over me the whole race, never touched me, drove me clean,” White said.

Short Track Super Series announcer Jeff Ahlum was there in Victory Lane to interview White in the beginning of his career on the mic.

As the 1990s pressed on, White raced on the Pennsylvania circuit until concentrating on Five Mile Point Speedway, where he called home from 2004 until 2022, winning seven modified features along the way, including one in 2022, which he noted was one of the best years of his career.

White came to the Cajun Swing surrounded by family and friends, from both the North and Southeast, carrying support from longtime sponsor and employer Deka Battery, where he retired from as a shop foreman just a few years ago. He sold his HigFab racecar on the first night of the Swing and set his sights on finishing the week in one of his son-in-law Danny Creeden’s cars. Engine trouble kept him from competing at Ark-La-Tex, but after a few hours of hard work and a true group effort, White is ready to roll one last time.

Forty-five years of Barry White racing will come to an end at Boothill Speedway in Greenwood, Louisiana tonight as he battles for the $20,000 top prize in the “Gunslinger 50.” What has kept him racing season after season on a tight budget?

Barry White is a winner.